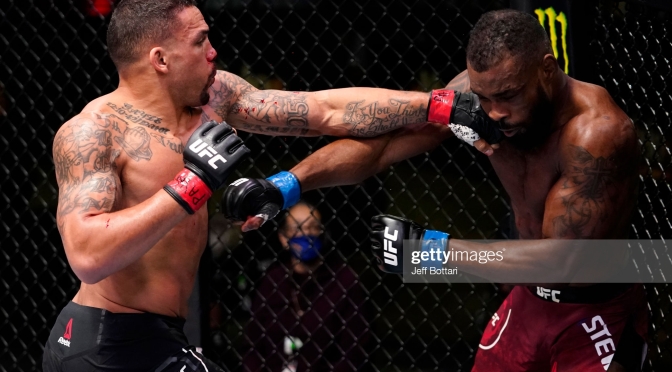 Another blockbuster pay-per-view card is upon us as UFC 263 finally lands on our TV screens from Arizona as Israel Adesanya returns to the octagon to defend his middleweight championship against Marvin Vettori.

It’s a highly anticipated rematch at 185lbs after the two previously met in 2018, with Adesanya getting the nod in a split decision. But after defeat last time out at light heavyweight, Vettori now has the blueprint to victory and will look to execute it to become the new champion.

In the co-main event the flyweight title will be on the line as Deiveson Figueiredo takes on Brandon Moreno in their rematch from UFC 256. After the first fight ended in a draw, Figueiredo will be targeting an early finish in this one to put a stamp on his title reign.

We also have a historic fight on the main card, as Leon Edwards gets a chance to become a household name against Nate Diaz in the first ever non-title, five-round bout not headlining the card.

We’ll look to improve on that with these 14 fights, and after predicting the early prelims here lets move on to the rest of the prelims now.

A very fun featherweight fight between the undefeated Evloev against the impressive Dawodu. Evloev got wins at UFC Fight Island 3 over Mike Grundy and UFC 257 against Nick Lentz via decision, while Dawodu is on a five-fight win streak himself including a split decision over Zubaira Tukhugov at UFC 253.

Evloev is among the elite wrestlers in the UFC, who will take you down and hold you down for as long as he wants to beat you up on your back. Dawodu on the other hand is a striker with good power, but he has a mean leg kick and a tight front guillotine too. While those kicks will be key to his path to victory, they also give Evloev a constant chance to catch them and take him down and that’s a big problem.

Overall, Evloev’s wrestling is just too good for Dawodu and he should be able to beat him up for 15 minutes for a wide win.
PICK – Movsar Evloev via Decision

Two UFC veterans go head-to-head in the women’s flyweight division here to break into the title conversation once again. Murphy has won four-in-a-row, with a decision over Roxanne Modafferi at UFC Vegas 3 before a submission win over Lillya Shakirova at UFC 254. Calderwood went 1-1 in 2020, losing to Jennifer Maia at UFC Vegas 5 before beating Jessica Eye at UFC 257.

Murphy is a terrific striker, with her clinch game among the best of the rest in the division outside of the champion. She uses her long limbs well and loves to land an elbow, while Calderwood is a decent striker in her own right but she has wrestling to fall on too. Calderwood is arguably the better striker, but Murphy has more tools in her belt to push for a win.

She’s got striking, grappling and size and I think this win sets her up for a title fight.
PICK – Lauren Murphy via Decision

The UK’s Darren Stewart makes a return to the octagon after a mixed 2020 when he takes on Eryk Anders looking to get back on track. Stewart went 1-2 last year losing to Bartosz Fabinski on a Cage Warriors card after UFC London got cancelled, before submitting Maki Pitolo in the first round at UFC Vegas 6 and losing a split decision to Kevin Holland at UFC Vegas 11. Anders has lost four of his last six, most recently to Krzysztof Jotko in May before missing weight in November. These two fought each other in March at UFC Vegas 21, but it was a no contest after an illegal knee from Anders.

Both guys are quite well rounded all over the mixed martial arts world, but Anders seems to struggle under pressure. Stewart seems super confident in his chin and that means he’s happy to walk forward and he’s certainly more active. I think he has the physicality advantage too and with good submission skills and good power he will be confident. Anders showed that he has the power to hurt Stewart though in their first bout and that could lead to a more wrestle heavy approach from Stewart.

Ultimately, ‘The Dentist’ runs it back and snaps a two-fight winless run.
PICK – Darren Stewart via Decision

A truly brilliant fight for the feature prelim bout as Dober and Riddell meet in a striker’s paradise type fight here. Dober was on a three-fight win streak before taking a short-notice fight with Islam Makhachev and getting choked out at UFC 259, while Riddell got a win over Alex da Silva Coelho at UFC 253 before a fight with Gregor GIllespie fell through in March.

Dober is a terrific boxer with good leg kicks and a great gas tank, with plenty of power in his right cross. Riddell on the other hand is a world class kickboxer with power in all his limbs and joints, while his footwork often opens up new angles for him to strike. Both guys are durable and skilled with power too.

Riddell sometimes starts slowly, but his experience in a purely stand-up battle tells me he has the edge here. Neither guy will need to prepare for takedowns and when it comes to just pure striking, there aren’t many 155lbers better at it than Riddell.
PICK – Brad Riddell via Knockout, Round 3

One thought on “UFC 263: Adesanya vs Vettori 2 – Prelims predictions”