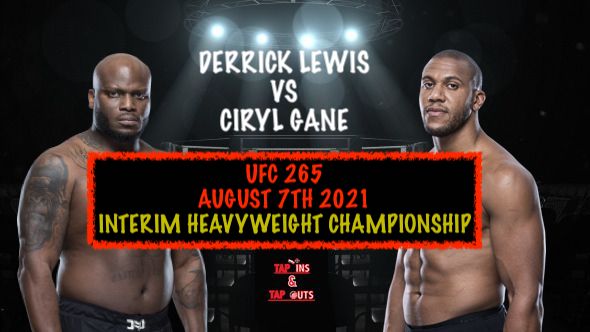 The UFC have moved to get the heavyweight division moving once again by setting up an interim title fight between number one ranked Derrick Lewis and number two ranked Ciryl Gane at UFC 265.

Lewis is the number one contender and was expected to fight newly crowned champion Francis Ngannou, but after several scheduling conflicts between all three parties the organisation has made the decision to proceed without him.

After his win at UFC Vegas 30 against Alexander Volkov, Ciryl Gane is also deserving of a title shot himself and the UFC have rewarded him with this fight – with the winner to take on Ngannou towards the end of the year.

With Ngannou unavailable to fight until September at the earliest but the UFC keen to strengthen the UFC 265 card in Houston, Texas in August, the decision was made to put the two top ranked heavyweights against each other and to create an interim title for them to compete for.

Ngannou responded angrily to the news after he was forced to wait for his title shot when Stipe Miocic and Daniel Cormier played out their trilogy of bouts, but the bout will not see his undisputed heavyweight champion status affected in any way.

Lewis is on a four-fight win streak with knockouts over Aleksei Oleinik at UFC Vegas 6 and Curtis Blaydes at UFC Vegas 19 most recently after decisions over Ilir Latifi and Blagoy Ivanov.

Gane on the other hand is 6-0 in the UFC and 9-0 overall in his career and followed up a knockout win over Junior Dos Santos at UFC 256 with dominant decision wins against Jairzinho Rozenstruik at UFC Vegas 20 and then Volkov this past weekend.

The UFC 265 card will take place on August 7th and will be co-headlined by the return of the greatest female mixed martial artist of all time Amanda Nunes, who defends her bantamweight title against Julianna Pena.

With Ngannou publicly keen to face Jon Jones in his first heavyweight title defence and Jones still holding out for a more lucrative pay day, this fight does potentially give all parties more time to find a deal.

That would see Ngannou become active again and then the winner of this bout would still face the winner in the next title shot.

It’s an interesting move on the UFC’s part to anger their new champion though, someone who saw their popularity surge after knocking out Miocic in spectacular fashion to claim the title at UFC 260 in March this year.

Ngannou took a short break from training to go back to Cameroon with his title but has been open to a September date, with his team stating that they had provisionally agreed to a bout at UFC 266 on September 25th with Lewis.

It will be interesting to see how this all plays out, but we’ve got a huge heavyweight title showdown to look forward to now in the very near future.