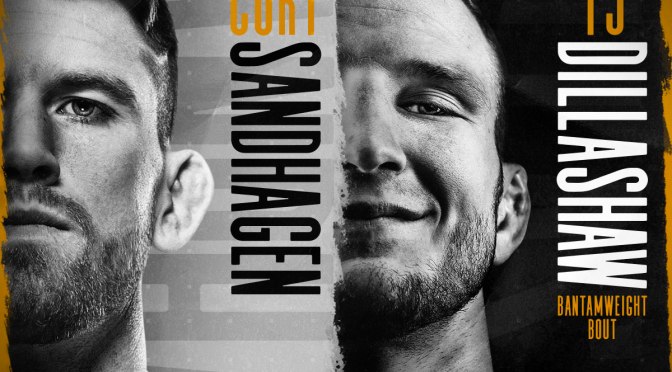 Arguably the best fight of the year not on a pay-per-view card headlines UFC Vegas 32 this weekend as Cory Sandhagen puts his number one contender status on the line against the returning former champion TJ Dillashaw.

The two were supposed to fight back in May, only for Dillashaw to sustain a cut in training forcing the bout to be postponed. In what should be an incredibly close fight, the winner is likely to get the next title shot against the winner of Aljamain Sterling and Petr Yan’s rematch.

Elsewhere on the card, two young female prospects go head-to-head when Miranda Maverick and Maycee Barber square off on the main card in the flyweight division. Knockout sensation Adrian Yanez also returns to the octagon to take on Randy Costa too.

We’ll look to improve on that here with this 13-fight card and after starting with the early prelims here and finishing off our prelims picks here, we move on to our main card picks here.

An absolute banger of a scrap at bantamweight as two super hot prospects go head-to-head here. Yanez is 2-0 in the UFC with two stunning knockout wins over Victor Rodriguez at UFC Vegas 12 and then Gustavo Lopez at UFC Vegas 22. Costa has won his last two in the UFC, including a stunning head-kick KO over Journey Newson at UFC Vegas 11.

Yanez has been dubbed the ‘mini Masvidal’ for his brilliant boxing skills and great kicks to the body, while Costa is a fantastic striker himself. Yanez is really good at setting up his kicks to the body and he has genuine knockout power in his hands. Costa on the other hand is a tricky fighter who switches stances, and that could allow Yanez to catch him on the inside.

It’s due to be a phenomenal striking battle and neither will want to give up anything against the other which could see a finish and I think Yanez will edge it, but don’t be surprised if Costa scores the win.
PICK – Adrian Yanez via Knockout, Round 2

An incredibly fun UFC flyweight fight in this one as two of the hottest prospects in the division. Maverick is on a five-fight win streak and is 2-0 in the UFC with wins over Liana Jojua at UFC 254 and Gillian Robertson at UFC 260. Barber on the other hand was looking to become the youngest champion in UFC history before a defeat to Roxanne Modafferi where she tore her ACL, then lost her return against Alexa Grasso at UFC 258.

Maverick and Barber are both excellent strikers with genuine knockout power. Barber is a very solid wrestler who will look to hold her opponent down and slam ground and pound until she separates them from their consciousness. Maverick is really good at throwing in combinations on the feet and using her elbows and kicks well.

It’s a really tight fight and one that could well be the birth of a star and also fight of the night. Both have a path to victory but I think if they both tire, Maverick’s technique may help her out to land the better shots late and eek a close decision win.
PICK – Miranda Maverick via Decision

The worst tattoo in the UFC (maybe the world?) returns to the octagon to take on Minner in the featherweight division. Elkins snapped a four-fight win streak last time out with a submission win over Luiz Garagorri at UFC Vegas 13, while Minner has won his last two against TJ Laramie at UFC Vegas 11 and then beating Charles Erosa at UFC Vegas 19.

Elkins is a well rounded fighter who is excellent at firing strikes with volume and pushing the pace. Minner on the other hand is a remarkable submission artist with 22 of his 26 wins coming via tap out. Elkins has some good body kicks and solid wrestling too and his scrambles are solid but Minner is so good on the ground it might not even matter.

‘The Damage’ is 37 now though and past his prime and while he beat Garagorri, that’s not a big teller of where he is right now. Minner on the ground is unreal and this fight will almost certainly go to the ground, so I can’t see how he doesn’t secure a submission once again.
PICK – Darrick Minner via Submission, Round 2

A very fun bantamweight banger as ‘The Matrix’ takes on the the decision master that is Paiva. Phillips has won four-in-a-row including all three of his UFC bouts against Gabriel Silva, Cameron Else and most recently Song Yadong at UFC 259. Paiva has won his last two, including his most recent against Zhalgas Zhumagulov at UFC 251.

Phillips is a solid striker on the feet with a background in wrestling to fall on where needed. He’s got good kickboxing and mixes it well with takedowns and makes it really hard to make reads on him for his opponents. Paiva is a good striker in his own right but he is a flyweight moving up and that won’t stand him in good stead here.

Phillips is bigger, stronger, more well rounded and this should be a pretty easy win barring something miraculous happening.
PICK – Kyler Phillips via Decision

An intriguing fight at the top of the women’s bantamweight division as Aspen Ladd takes on Macy Chiasson. Ladd is a great striker, who’s only defeat came in just 16 seconds against Germaine De Randamie. She bounced back from that with an impressive KO win over Yana Kunitskaya back in 2019 but hasn’t fought since. Chiasson won TUF 28 and has since gone 4-1 in the UFC proper, with her most recent win coming against Marion Reneau at UFC Vegas 22.

Ladd is a brilliant wrestler who has some violent ground and pound and vicious striking on the feet to go with it, while Chiasson is a super well-rounded fighter herself too with an even split of finishes via knockout and submission. Ladd is returning from a torn ACL/MCL injury but while Chiasson has got some good names on her resumé she’s not fought anyone of the calibre of Ladd before.

Ladd is powerful, quick, a great striker and has the advantage with the wrestling too which means she can dictate where this fight goes. Because of that, she’ll only need one takedown per round to control and land some vicious shots and therefore I think she’ll get the win.
PICK – Aspen Ladd via Knockout, Round 2

Arguably the best main event of the year so far for a fight night card, Sandhagen takes on the returning Dillashaw in the headline fight. Sandhagen has won nine of his last 10 fights, including two in a row against Marlon Moraes at UFC Fight Island 5 and Frankie Edgar at UFC Vegas 18. Dillashaw is coming off a two-year suspension for failing a drugs test, after losing in under a minute to Henry Cejudo at flyweight last time out.

Sandhagen is an amazing technical striker, with his last two wins coming via a spinning wheel kick followed by ground and pound and then a flying knee walk-off KO. Dillashaw is one of the most well-rounded fighters in the division with excellent wrestling and powerful striking and kicks. Having been out for two years though, at this level, is something that is incredibly tough to overcome.

If Dillashaw can get in and wrestle Sandhagen he has a good chance, but ‘Sandman’ is one of the best at range management in the division and he has been very active while Dillashaw has been away. For that reason, I think he’s able to secure a huge win for his career in a real banger of a fight.
PICK – Cory Sandhagen via Decision