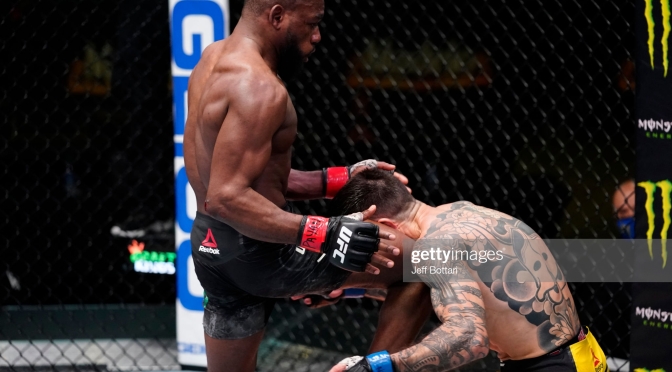 The UFC heavyweight division moves a step closer to naming a solidified number one contender as Derrick Lewis takes on Ciryl Gane for the interim heavyweight title at UFC 265.

After a deal with Francis Ngannou and Jon Jones couldn’t be found, the UFC moved to keep the division moving and will see the number two and three ranked heavyweights battle it out in the main event with the winner essentially guaranteeing themselves the next shot at the belt.

In the co-main event Jose Aldo continues his push for bantamweight greatness when he takes on Pedro Munhoz, while the welterweight division looks to create a new contender too as Michael Chiesa takes on Vicente Luque.

We’ll look to improve on that now with this 13-fight card, starting with the early prelims here.

An interesting first fight of the card as two bantamweights look to earn their first win in the UFC after disappointing debuts. Munoz was beaten by Nathan Maness back at UFC Vegas 5 in a weird decision, while Simmons was KO’d in the first-round of his very short notice debut against Giga Chikadze at UFC Vegas 13.

Munoz is a ground fighter who looks to take the fight down and work his excellent jiu-jitsu skills, while Simmons is a solid wrestler who pushes the pace and goes for takedowns of his own. Both guys like to control their opponent and I think Simmons has the edge when it comes to that, with the better cardio and better wrestling.

When he has the fight on the ground he’ll have to be very careful of the slick submissions that Munhoz possesses. Unfortunately, his defences aren’t the best and with Munoz’s kicks to the leg and body I think he’ll be able to secure a victory here.
PICK – Johnny Munoz via Submission, Round 2

An intriguing flyweight fight between two UFC newbies as Leonardo looks for her first win and Gatto makes her debut. Leonardo was KO’d by Manon Fiorot via head-kick back in January at UFC Fight Island 8 while Gatto is undefeated but hasn’t fought since 2018.

Leonardo is a decent striker on the feet and has very good grappling skills with a heavy wrestling offence, while Gatto was a submission specialist with four of her six wins coming via tap out. With that said I say was because it’s been so long since anyone has seen her. She’s been away for nearly three years and has likely improved a lot but if not then Leonardo has her beat and badly.

Gatto is obviously talented but the gap since we last saw her is too big to bank on what improvements she’s made, if any. Therefore I’ll go with Leonardo to grind out a decision, but don’t be surprised if Gatto looks sensational.
PICK – Victoria Leonardo via Decision

A fun scrap as two bantamweights look to earn themselves a two-fight win streak in the UFC with a win here. Johns was stopped by Mario Bautista before bouncing back with a stoppage win of his own against Kevin Natividad at UFC Vegas 12. Dos Santos lost his first two UFC fights via decision, but finally got a win when he submitted Martin Day.

Johns has a stiff jab that lands very often and always has his wrestling skills to fall back on whenever necessary. Dos Santos on the other hand has good power in his hands but the techniques are limited to hooks mostly, while his submission game on the ground is great and dangerous.

Johns’ wrestling is good enough to control where the fight goes and has the better striking on the feet, so as long as his cardio holds up this should be a good win for him.
PICK – Miles Johns via Decision

An absolute banger at flyweight as Manel Kape looks for his first win in the UFC against the powerful Ode Osbourne. Kape entered the UFC with high expectations but was beaten by Alexandre Pantoja and then Matheus Nicolau in his first two bouts, while Osbourne earned a KO win last time out against Jerome Rivera in just 26 seconds.

Kape is a powerful striker with good kicks, but he has struggled with his output in his two bouts so far which has cost him. Osbourne is an incredibly fast and powerful puncher, with genuine knockout power in his hands. One thing Osbourne is good at is pushing forward and forcing his opponents to fight him but that may actually work in Kape’s favour as it could force him to throw his hands more.

Kape’s got a good chin, has a good ground game if he needs it and the experience of fighting some serious top level talent. Osbourne hasn’t done that yet and while he could close the show with one shot, the longer this fight goes the more it leans in Kape’s favour and I think he takes the win.
PICK – Manel Kape via Decision