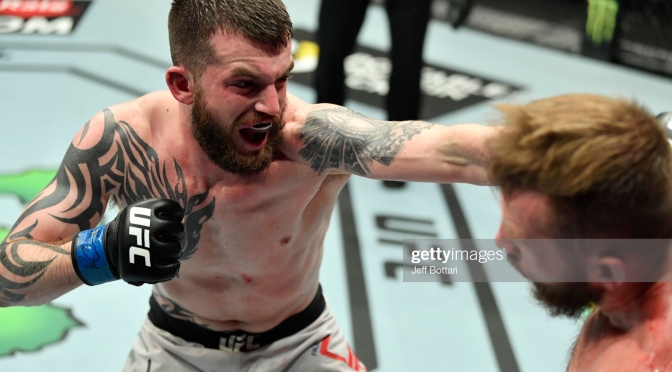 The UFC returns after a two week break with two middleweights battling to get back into contention at the top of the rankings as Jared Cannonier takes on Kelvin Gastelum.

Originally supposed to be Paulo Costa, Gastelum stepped in to take over this bout and knows that a win for him can get him back in the conversation for a future title shot while Cannonier knows he’s just two big wins away from a title shot in all likelihood.

In a 12 fight card, it’s a card with a few sleeper fights and a killer main event so lets see how we do with our picks.

An interesting women’s bantamweight bout in this one. Sweden’s Malecki is 2-0 in the UFC but hasn’t fought since March 2020, but is unbeaten in her professional career. Nunes on the other hand is on a six-fight win streak and is set to make her UFC debut in this one after her initial debut got cancelled on super-short notice last time out.

Malecki is a classic striker, with good kicks and range management on the feet but a totally non-existent ground game. Nunes on the other hand is a power striker who stands at just 5ft 2′ and has six knockout wins in her career. Nunes has a decent ground game too, but with such a size disadvantage in each of her fights she doesn’t really get to use it. Malecki will look to try and control range but with a lack of power, her opponents tend to just walk through it to get to her.

Neither of these women are going to light up the bantamweight division any time soon with their current level or skillset, but Malecki’s ability to strike from a distance should be enough to earn a decision win in a not-so entertaining bout.
PICK – Bea Malecki via Decision

A very fun bantamweight fight in the men’s division for this one. ‘Boom’ Kelleher returns to action after defeat to Ricky Simon at UFC 258, while Pilarte fights for the first time since February 2020 when he got knocked out by Journey Newson in just 38 seconds but saw it overturned after a positive marijuana test.

Kelleher is a really well rounded fighter, with good submission skills on the ground as well as a really powerful right hand. Pilarte is similar, but to a lesser level, with decent power and a sneakily good ground game himself. Pilarte has some good calf kicks in his game but defensively he is poor and Kelleher can take advantage of that. If he steps forward and applies pressure, he has a good enough chin to take damage and enough power to end the fight early.

If the fight goes to the ground it will be interesting, because Kelleher is capable of out-scrambling Pilarte and pushing a great pace but overall I think Kelleher gets the win on the feet and the ground to earn himself a good win.
PICK – Brian Kelleher via Knockout, Round 2

Featured prelim fight is a fun featherweight scrap between two up and coming fighters. Lingo bounced back from defeat in his UFC debut to earn a decision win over Jacob Kilburn at UFC Fight Island 7, while Saldana has won five in a row including last time out against Jordan Griffin at UFC Vegas 23.

Lingo is a man with genuine knockout power on his feet, but nothing more than decent boxing technique outside of that. Saldana on the other hand is a kickboxer with good range management and a solid kicking game with good wrestling in his back pocket too. Lingo isn’t the most aggressive fighter considering his best chance to win fights is to land a big single shot and that will help Saldana.

If Lingo can press forward and maintain his power, Saldana struggles with pressure but I don’t see Lingo employing those tactics. Because of that, Saldana is likely to stay at range and use his leg kicks and body kicks to earn a win via the judges.
PICK – Luis Saldana via Decision

One thought on “UFC Vegas 34: Cannonier vs Gastelum – Prelims predictions”