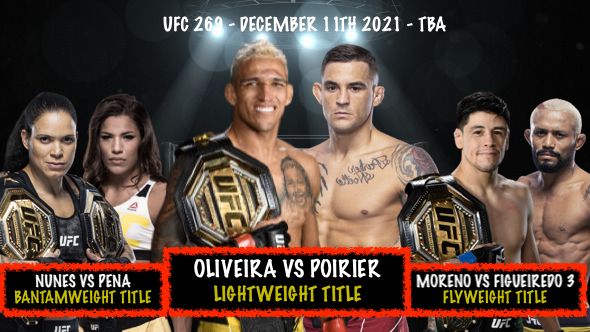 The UFC will close out 2021’s pay-per-view calendar with an absolute banger of a card after it was revealed three title fights will headline UFC 269 in December.

After what has been a blockbuster year of fights the UFC have announced that there will be three huge title fights in the final pay-per-view event of the year, headlined by Charles Oliveira’s first defence of the lightweight title against Dustin Poirier.

That will be supplemented by the women’s MMA G.O.A.T Amanda Nunes making her return to the bantamweight division to defend her crown against long-time rival Julianna Pena in their rescheduled fight from earlier in the year.

As if that wasn’t enough, a third title fight will be on the card as new flyweight champion Brandon Moreno will fight former champion Deiveson Figueiredo for the third fight in a row as they round off their trilogy.

Oliveira was crowned the undisputed lightweight champion back in May, defeating Michael Chandler via second-round knockout at UFC 262. That fight could have included Poirier, but he turned down the title opportunity in favour of a trilogy bout with Conor McGregor at UFC 264, which he won via doctor’s stoppage after the first round when ‘Notorious’ broke his leg.

Poirier and Oliveira have been on a collision course, with the Brazilian on a nine-fight win streak to become champion while Poirier is 8-1 with 1 no contest in his last ten fights. The only defeat came in his only previous shot at the undisputed title, being submitted by Khabib Nurmagomedov at UFC 242.

The fight is one that many fans will see as the real crowning of the new king of the division after the bout between Oliveira and Chandler came under criticism. Oliveira had just one win against a fighter ranked in the top five before that, while Chandler had only had one fight in the organisation – beating Dan Hooker via first-round knockout at UFC 257.

Amanda Nunes’ return to the bantamweight division comes after two straight title defences at featherweight, beating Felicia Spencer at UFC 250 and then destroying Megan Anderson at UFC 259 to retain her double champ status.

She will take on number five ranked Pena in a rescheduled bout in the co-main event, after their initial bout at UFC 265 last month was cancelled when the champion tested positive for COVID-19.

Pena has gone 2-2 in her last four fights, winning last time out against Sara McMann via submission. She has been calling Nunes out for a long time but after struggling to get a real run of wins going recently the title shots have instead gone elsewhere.

But with a lack of contenders for Nunes to face, Dana White has granted her wish and the champions has finally agreed to fight her despite her lack of win-streak and relatively low ranking.

Finally, we’ll get to run back one of the best flyweight rivalries in history one more time as Moreno and Figueiredo complete their trilogy.

The two fought in December 2020 at UFC 256 in one of the fights of the year, with the end result being a draw after Figueiredo had a point deducted for low blows in the third round. The rematch took place in June at UFC 263, with Moreno becoming the first ever Mexican born champion via a third-round submission win in a fight he largely dominated.

Figueiredo has been campaigning for a rematch since his defeat, after he granted Moreno one despite health problems. The UFC attempted to match Moreno with Alexandre Pantoja but he was suffering from a knee injury and was unavailable for December, with the champion wanting to remain active and keep the division moving.

top 5 ‘the ultimate fighter’ seasons ever