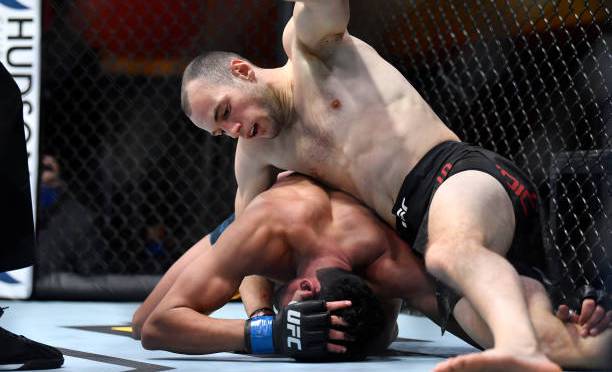 An absolutely stacked UFC card heads to Las Vegas this weekend as UFC 266 hosts two title fights and a huge return to the sport.

Alexander Volkanovski and Brian Ortega will finally meet for the featherweight title in their rescheduled fight from UFC 260, with ‘T-City’ looking to fulfil his destiny of becoming the top dog at 145lbs.

In the co-main event, Valentina Shevchenko looks to continue on her path as one of the greatest mixed martial artists ever when she defends her flyweight crown for a sixth time against Lauren Murphy before the return of Nick Diaz to the UFC when he takes on Robbie Lawler and hopes to start something special with a win.

A fun featherweight bout to open up between two guys with one loss each in their UFC careers so far. Pearce lost his debut to Joe Lauzon in 2019 before bouncing back with a KO win against Kai Kamaka III at UFC Vegas 15, while Morales was beaten by Giga Chikhadze at UFC Fight Island 5, but recovered to earn another win against Shane Young at UFC 260.

Pearce is a long-time wrestler who looks to push the pace and wear on opponents, with excellent ground and pound leading him to eight KO wins in ten career victories. Morales on the other hand is a technical striker with excellent low kicks and improved wrestling in recent times. Morales has good defence and rarely exerts himself too much, but he does have a tendency to cruise in fights and Pearce will look to make him uncomfortable.

On the feet Morales has the advantage but on the ground and in grappling exchanges it’s Pearce who has the edge. Stylistically I think the fight suits Pearce a little bit more because of his volume and pressure but the experience and skill of Morales will likely see him get the decision win.
PICK – Omar Morales via Decision
BETTING TIP – Over 2.5 total rounds @ 8/15 (Bet365)

Some very odd matchmaking here in the welterweight division between Semelsberger and Sano Jr. ‘Semi the Jedi’ was on a five-fight win streak before losing to Khaos Williams at UFC Vegas 29, while Sano Jr has fought three times since 2014 and hasn’t won any of them.

Semelsberger is a powerful striker with a decent bit of wrestling in his back pocket too. Sano is the main training partner of Nick Diaz and that’s why he’s on the card, not because he’s done anything to earn himself a spot on the roster. He’s got okay boxing and okay jiu-jitsu, but he’s nowhere near good enough to do anything significant to Semelsberger here.

A very short notice fight after Karl Roberson pulled out during fight week, the undefeated Nick Maximov now faces Cody Brundage in both men’s promotional debut. Brundage lost on Dana White’s Contender Series but bounced back with a submission win in February to get a chance here, while Maximov won on the Contender Series in November last year to earn his spot.

Brundage is a strong striker with excellent Muay-Thai skills, but he also has a good wrestling background too. Maximov however is the stronger grappler in this battle, with his style generally set around securing a takedown and controlling the position on the ground. Maximov has a great chin and some great jiu-jitsu skills too, training with the Diaz brothers.

Brundage would generally have a really good chance of winning this fight if it wasn’t on just three day’s notice. Because it is though, Maximov will be in fighting shape and his style is so wearing on an opponent that I think he’ll be able to secure a victory.
PICK – Nick Maximov via Decision

A fun lightweight fight to close out the early prelims as the undefeated Medic takes on the ‘The Tarantula’. Medic has a perfect record of seven wins in seven fights, winning against Aalon Cruz in the first-round last time out at UFC 259. Turner on the other hand has won his last two via finish, most recently securing a submission win against Brok Weaver at UFC Vegas 10.

Medic is a superb striker with powerful hands and strong kicks, with a real killer instinct having finished all of his career bouts. Turner is a powerful striker in his own fight, with long limbs helping him on the ground too for someone else who has finished all of his career wins. Both guys like to fight on the outside and use their range, which will play into Turner’s favour with a six-inch advantage. However, Medic’s speed and pressure is something that Turner isn’t a big fan of which makes this very interesting.

Both have the power to stop the other and while Medic isn’t the most proven fighter, he’s never lost. Turner has been stopped by strikes three times before, but he’s by far the best fighter that Medic will have ever fought. It’s a close fight no doubt and whoever wins will have earned it, but I think Medic will be able to show his talent and get a big win.
PICK – Uros Medic via Knockout, Round 2
BETTING TIP – Fight NOT to go the distance @ 8/15 (Bet365)

nick diaz’s return could be the start of something special