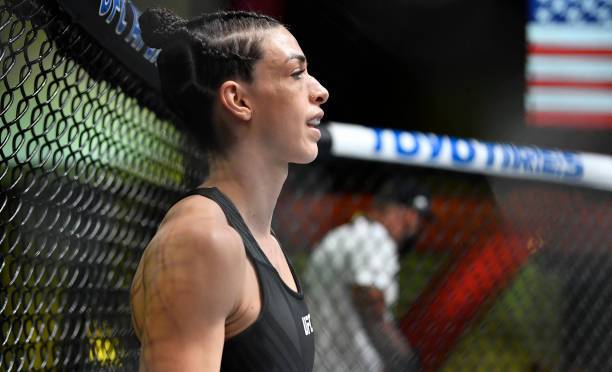 It’s not often that you get two contenders in the upper end of the UFC rankings fighting and there’s zero talk around a title shot for their fight.

That seems to be the case currently with the UFC Vegas 39 main event, as Mackenzie Dern looks to make it five wins in a row in the women’s strawweight division when she takes on Marina Rodriguez who has won her last two.

Both women are currently ranked at number four and six respectively at 115lbs, with a title fight scheduled for next month and two inactive fighters ahead of them. A win for either really gives them a chance to stake a claim for a title fight.

As they meet in their contender fight, the landscape of the division is currently uncertain.

Rose Namajunas makes her first title defence since winning the belt from Weili Zhang at UFC 261, when she takes on the Chinese fighter in an immediate rematch at UFC 268 in November.

Number two ranked Joanna Jedrzejczyk hasn’t fought since her defeat to Zhang back at UFC 248 in March 2020 in arguably the greatest women’s mixed martial arts fight of all-time. That was however her fourth defeat in six fights, with all four coming in title fights.

It begs the question of whether she can compete at the very highest level anymore, considering she dominated the strawweight division for years before defeat to Namajunas. With no fight close to being scheduled at the time of writing and the Pole stating she’s only interested in title fights at this time, it’s probably fair to discount her from the race.

Below her is Carla Esparza, who has won five in a row and most recently earned a knockout win over Xiaonan Yan at UFC Vegas 27. She’s got the biggest claim to a title shot next, but her star power is lacking and after three of those five wins came via decisions that weren’t unanimous there is a case to make her earn the shot once more against a top five opponent.

That opens the door for Dern or Rodriguez to claim a spot against the winner of Namajunas and Zhang at some point in early 2022.

The winner will have beaten someone currently in contention, unlike the two ranked fighters above them currently, and would provide very different match ups for whoever the champion is compared to what they have fought previously in their UFC careers.

A first main event slot for Dern means she has the opportunity to make a statement of intent and show the world that she really is ready to challenge for the throne. She just has to win first.