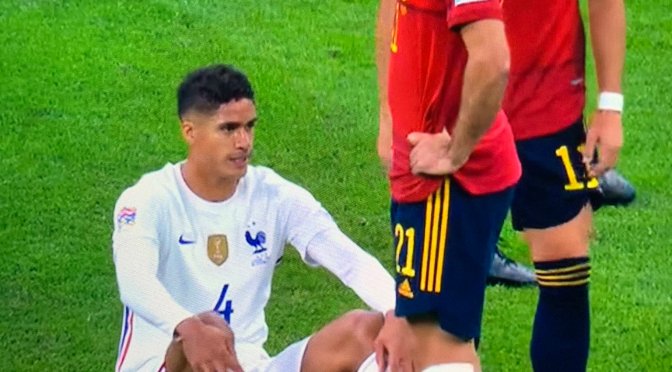 Manchester United defender Raphael Varane has sparked panic among supporters after he was substituted for France with an injury.

Varane started in the centre of a back three for the reigning World champions in their UEFA Nations League final against Spain. But after 41 minutes a ball was played over the top and replays showed the 28-year-old grimace with pain.

The former Real Madrid man went down with the ball out of play and after a short period of treatment from the medical staff was immediately substituted, with Bayern Munich defender Dayot Upamecano replacing him.

While the injury wasn’t clear and there was no coming together with another player, Varane was then shown on the bench by Sky cameras with an ice pack strapped to his right thigh.

That would suggest a muscle injury and would likely mean he would miss at least a few weeks if the problem is as bad as it seems.

That is awful news for Ole Gunnar Solskjaer’s side, with captain Harry Maguire already out injured with a calf problem picked up against Aston Villa in the Premier League.

That would leave Victor Lindelof, Eric Bailly and Phil Jones as the only fit centre-back options, with the Ivorian playing just once and Jones yet to feature for the first-team this season.

They then have back-to-back games at Old Trafford against Atalanta in the Champions League before a huge clash with rivals Liverpool the following weekend.

They then travel to north London to take on Tottenham Hotspur before the return fixture against Atalanta in Europe, before finally taking on Manchester City at Old Trafford on November 6th.

neymar says qATAR WORLD CUP WILL BE HIS LAST