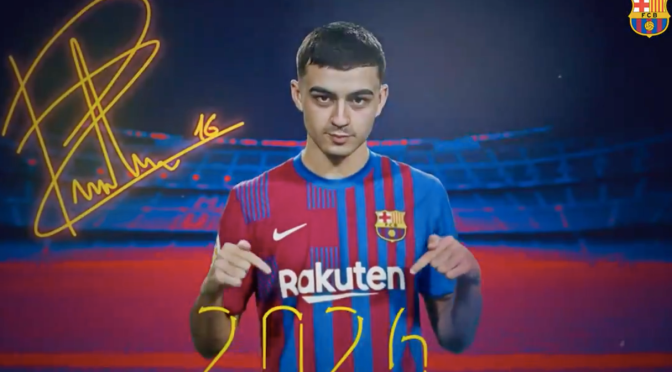 Barcelona have moved to ensure they don’t suffer another Lionel Messi situation with their new midfield star Pedri, after he signed a new five-year deal with the club.

The 18-year-old midfielder has grown in the last 12 months to become a key player for both club and country, but was into the final year of his contract at the Camp Nou.

Barcelona moved quickly to sign him to fresh terms after his breakthrough and a deal was agreed until 2026, with the club entering a €1bn release clause into the contract.

Pedri made an amazing 52 appearances for the Catalan giants last season under Ronald Koeman as they finished in third place in La Liga, before starring at Euro 2020 in midfield for Spain as they reached the semi-finals under Luis Enrique.

He then went with the national team to the Olympic Games in Tokyo in the summer, helping the side earn a silver medal as they were defeated by Brazil in the final.

After starting the season with Barcelona, the youngster has been given a well deserved break recently in order to avoid burnout and/or injury.

But despite that, his importance to the club as a whole has been clear for all to see and the club have ensure that what once happened to Neymar at the club won’t happen again by inserting a world-record €1bn release clause into his contract.

In Spain every player must have a release clause inserted into their contract by law, but Pedri’s now ties Karim Benzema with the largest in the sport.

The club are in the midst of a huge rebuild after their poor financial position was unearthed by new president Joan Laporta.

Their finances meant they weren’t allowed to re-sign Lionel Messi to a new contract, which led to him signing for Paris Saint-Germain on a free transfer in the summer.

Barcelona are now looking forward to their future and are hoping to have Ansu Fati, Gavi, Ousmane Dembele and Ronald Araujo join Pedri in signing new long-term contracts with the club.