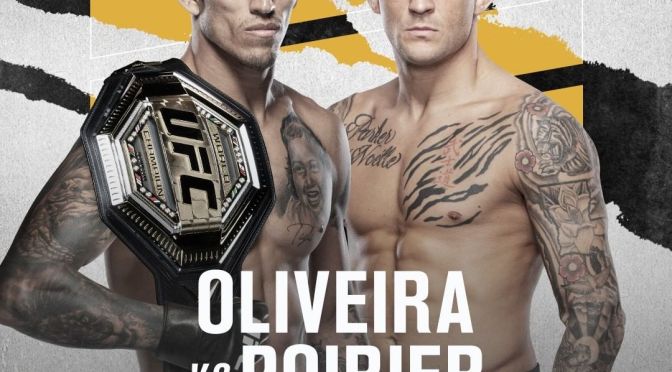 The UFC have announced the full card and location for their final pay-per-view event of 2021.

The card had been rumoured to have three title fights at one point, but the UFC last week announced that one of those had been moved to January 2022 at UFC 270.

But during UFC Vegas 40 on Saturday evening, the organisation officially announced the full card for the event on December 11th will take place at the T-Mobile Arena in Las Vegas and it is STACKED!

The card will officially be headlined by the lightweight championship bout between undisputed champion Charles Oliveira defending for the first time against Dustin Poirier.

Oliveira won the title at UFC 262 in May with a stunning second-round knockout win over Michael Chandler after almost being knocked out himself in the first round.

He’ll take on Poirier, who many believe to be the best 155lbs-er in the world currently and is coming off consecutive stoppage wins over Conor McGregor at UFC 257 and UFC 264.

The co-main event will see Amanda Nunes return to the octagon to defend her bantamweight title, when she takes on Julianna Pena in their rescheduled fight from UFC 265 after it was cancelled when the champion tested positive for COVID-19.

Nunes is on an incredible 12-fight win streak with eight finishes in that run, including a reverse triangle armbar win over Megan Anderson at UFC 259 in March.

Pena on the other hand is 2-2 in her last four fights and earned a win over Sara McMann via rear-naked choke last time out to earn the fight.

Elsewhere on the card, Leon Edwards and Jorge Masvidal will finally settle their differences in the cage when they meet in the welterweight division.

Edwards is on a ten-fight unbeaten streak (9 wins, 1 no contest) and most recently dominated against Nate Diaz at UFC 263. Masvidal is coming off consecutive title fight defeats to Kamaru Usman, including a brutal knockout loss at UFC 261.

The two have had a heated rivalry for several years now after a backstage altercation at UFC London led to Masvidal punching Edwards in the face and causing a cut under his eye.

Cody Garbrandt will also be on the main card making his flyweight debut when he takes on Kai Kara-France. Garbrandt snapped a three-fight with a brilliant knockout win over Raphael Assuncao at UFC 250, but then got dominated by Rob Font last time out in May.

Rounding off the main card, Sean O’Malley returns to take on the supremely talented Raulian Paiva in the bantamweight division. The fight is a chance for ‘Suga’ to enter the rankings before 2022, with Paiva currently the number 15 bantamweight in the UFC.

On the prelims, you’ll be able to Dominick Cruz vs Pedro Munhoz, Geoff Neal vs Santiago Ponzinibbio, Andre Muniz vs Dricus Du Plessis, Maycee Barber vs Erin Blanchfield as well as Gillian Robertson, Alex Perez and Ryan Hall too!