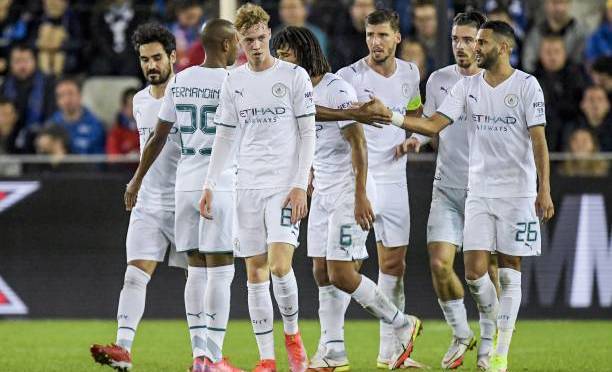 The buzzword coming out of the last weekend of Premier League fixtures seemed to be balance, after Manchester United’s 4-2 defeat to Leicester at the King Power Stadium.

But Pep Guardiola put that entire argument to bed nice and quickly in Tuesday’s Champions League fixture against Club Brugge as Man City waltzed to a 5-1 win with five attacking players in their lineup.

Guardiola named a strong lineup which included all of Bernardo Silva, Kevin De Bruyne, Phil Foden, Jack Grealish and Riyad Mahrez and City were able to dominate the game from start to finish and play some brilliant football in the process.

Foden created the first goal with a brilliant pass from deep for Joao Cancelo, before Mahrez stroked home a penalty that he won just before half-time.

In the second half it was more of the same, with Kyle Walker finishing off a brilliant passing move before Cole Palmer scored with his first touch and Mahrez capped off the night with another goal.

It was a masterclass in coaching from Guardiola, who’s side never looked in any danger throughout the game until a raft of changes meant the intensity in their game had gone.

For City, it was nothing new. They almost always play with five attacking players in some variation of a 4-3-3 formation, with two attacking full-backs in their arsenal too.

It puts to bed those ridiculous claims and arguments that United played too many attacking players in the defeat to Leicester, they just simply aren’t coached well enough to keep the balance when they do it.

Guardiola has always been able to keep his superstars in check by demanding they work hard off the ball, which in turn allows them to have the ball as much as they do.

It shows when they chase back and win the ball back quickly, then maintain possession for 65% of the game regularly while controlling the game and creating chance after chance.

City have been excellent for the most part this season and even without a centre forward they look a threat going forward regularly and are scoring goals freely.

zinedine zidane ‘has no interest’ in premier league