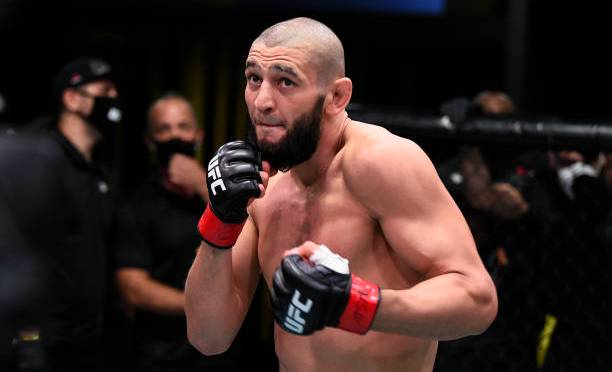 The year 2020 was wildly remembered by many MMA fans as the year that Swedish fighter Khamzat Chimaev broke into the mainstream.

Two wins in ten days on Fight Island followed by a 17-second knockout win over Gerald Meerschaert meant that Chimaev was being pushed to the moon in the UFC by president Dana White.

He was openly fighting in two weight classes and was even given the opportunity to fight a top-five ranked fighter in Leon Edwards despite never having fought anyone else in the rankings.

But with the Edwards fight being made, rescheduled and then scrapped three times the hype died down a little.

Chimaev suffered with COVID-19 and had long term symptoms from the virus that caused the world to shut down. The problems with his health led to kidney issues and he even teased retirement at one point.

But after receiving treatment, listening to the doctors’ advice to rest and finally getting healthy again, the 27-year-old is now ready to return to the Octagon once again at UFC 267 when he faces highly rated Jingliang Li.

This time however, the expectation surrounding him will be far greater than ever before.

There was a period of time where the buzz around Chimaev was so great that people were genuinely pushing for him to get a title shot against Kamaru Usman or Israel Adesanya, despite three wins against unranked fighters.

The moment has passed now however and many have seen the light that it was likely too soon for that to be a thing, so he now must prove himself all over again against a fighter who many believe could have a big future in the organisation.

On top of the fact that Li is by far the best fighter he’s ever fought, there will be pressure on him to deliver just as he has in each of his three dominant wins.

If he wants to pick up where he left off and get the hype train rolling again, simply winning may not be enough. But what a win does do is prove his legitimacy in the company and among the best around.

A win over Li means there is no going back for Chimaev as is the strength of the division. There will only be killers in his future, with super tough fights no matter where he looks.

This is the biggest test and biggest moment of his young career to date and Chimaev is going to look to take it with both hands at UFC 267.