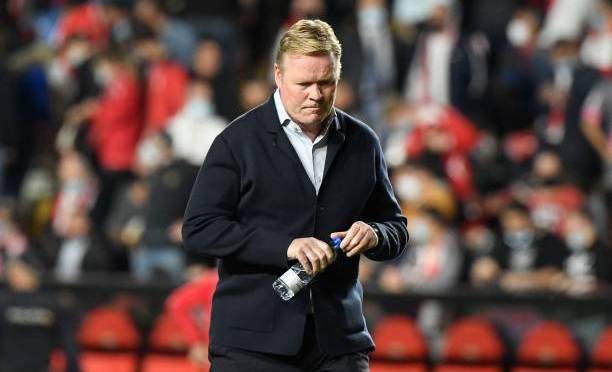 Ronald Koeman has been sacked by Barcelona after a 1-0 defeat to Rayo Vallecano on Wednesday night.

The Dutch coach has been under severe pressure this season since the departure of Lionel Messi and financial constraints meant that he was unable to strengthen his squad.

Fans have been unhappy about his style of football and results and it now seems that the club have had enough too, sacking him the night of the game.

According to Spanish outlet SPORT, the defeat to Rayo thanks to a first-half goal from Falcao was the final straw on the camel’s back and following the result the club’s board held a meeting where it was decided to sack him.

Koeman took charge of the club in August 2020 and led them to a third-placed finish in La Liga last season. He won the Copa Del Rey thanks to a thumping 4-0 win over Athletic Bilbao in the final.

But this season the Catalan club have really struggled, with four wins from their opening nine games in La Liga and just one win from their first three Champions League group games leaving their chances of qualification hanging in the balance.

Former Barcelona midfielder Xavi is the heavy favourite to replace Koeman, having just won a seventh trophy as manager with Qatari outfit Al Sadd and currently on a 34 game unbeaten streak in the league.

He has been heavily linked with a return to the club since president Joan Laporta was re-elected and with Koeman now gone, it seems likely he will return to the Camp Nou for the first time since leaving as a player in 2015.

Another potential candidate for the job are Belgium manager Roberto Martinez, although that is a far more difficult deal to do and Xavi is the firm number one choice of the board.

According to reports in the Spanish media, the plan is for a caretaker coach to take charge of games against Alaves, Dynamo Kyiv and Celta Vigo before Xavi takes over during the next international break.

One thought on “Ronald Koeman sacked by Barcelona”