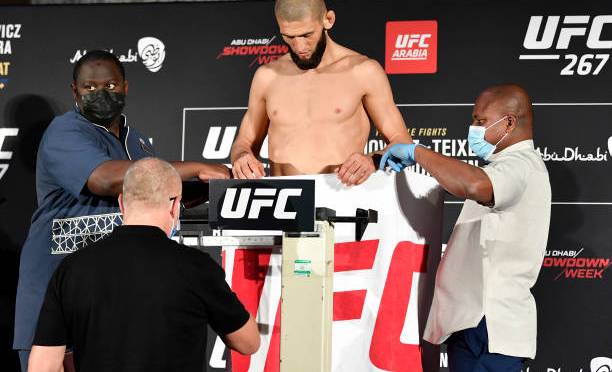 UFC 267 took a small hit at the weigh-ins on Fight Island this morning after one fight was scrapped and Khamzat Chimaev missed weight on his initial attempt.

The UFC returns to Fight Island for the first time since the start of the year with two title fights headlining the card as Jan Blachowicz takes on Glover Teixeira in the light heavyweight division, while Petr Yan and Cory Sandhagen go head-to-head for the interim bantamweight title.

But on a stacked 15-fight card, there was no chance it would go down with no hiccups and that was ultimately the case on Friday morning.

The returning Chimaev was the last one to take to the scale for his welterweight bout against Jingliang Li and initially weighed in half-a-pound over the 171lbs limit for the fight, seemingly touching the towel too after stripping down.

He returned shortly after and after the scale initially gave an incorrect reading, he officially weighed in at 171lbs for the fight to make it official.

At the start of the weigh-ins though there was a huge miss for the lightweight fight between Magomed Mustafaev and Damir Ismagulov.

Imsagulov, who was preparing for his fifth UFC fight having won each of his previous four, weighed in at 163.5lbs for the bout – a massive 7.5lbs over the 156lbs limit.

That means that the bout has been officially scrapped by the UFC, with Mustafaev making weight at the 156lbs limit.

Both title fights were made official, with all four fighters weighing in at their respective maximum limits.

UFC 267 will take place on Fight Island in Abu Dhabi on Saturday October 30th with a special start time of 15:30 BST for the early prelims on UFC Fight Pass, with BT Sport starting their coverage with the prelims from 17:00 BST.