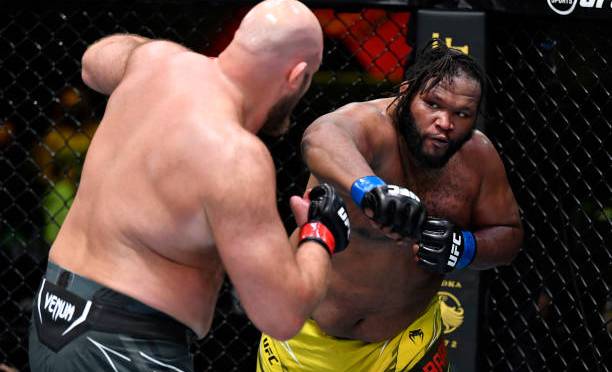 An absolute banger of a card takes place from Madison Square Garden this weekend as UFC 268 finally is upon us.

A welterweight championship rematch headlines the card as Kamaru Usman looks to lap the division when he takes on Colby Covington in the main event, while Rose Namajunas is looking to bring some stability to strawweight but she’ll have to dispatch of Weili Zhang once again in the co-main.

We also have violence guaranteed in the main card opener between Justin Gaethje and Michael Chandler in a lightweight contender bout.

We’ll look to continue that good momentum with this 14-fight card, starting off with the early prelims here.

A banger at flyweight to open the card up. Vergara is making his UFC debut after a 41 second KO win on Dana White’s Contender Series in September, while Osbourne is looking to bounce back from a knockout defeat against Manel Kape at UFC 265.

Vergara is a very exciting striker with great power and a ‘kill-or-be-killed’ mentality going into his bouts. Osbourne is pretty similar, with explosive power and great skills on the mat when on the offensive. Defensively though, both fighters are open to getting hit and that lends itself to a great fight this weekend.

Osbourne is likely to come out swinging to get his win back, having never seen a second round in his UFC run to date. He will look to keep his range with a five inch reach advantage, but Vergara is very good at getting on the inside and popping shots. Should be a great fight, but I think Osbourne’s edge in power leans towards him getting the finish.
PICK – Ode Osbourne via Knockout, Round 1

An interesting featherweight bout up next between ‘The Gun’ and ‘The Tiger’. Baghdasaryan earned a debut win in the UFC at UFC Vegas 33 via a head-kick knockout, while Souza makes his UFC debut on a ten-fight win streak. Souza is stepping in on one week’s notice, replacing TJ Laramie.

Baghdasaryan is a powerhouse of a striker with five of his six career wins coming via knockout. Souza on the other hand is a karate fighter who is the protege of the legendary Lyoto Machida. In what is sure to be a stand-up battle between two strikers, it really is power vs technique. In this instance, power should come up trumps.

Souza has been cracked before and while he has great technique, he doesn’t have the power to stop someone like Baghdasaryan coming forward. If this one goes into the latter stages, then Baghdasaryan’s cardio could come into question but I expect he’ll be able to land bombs and score another KO win.
PICK – Melsik Baghdasaryan via Knockout, Round 2

Jacoby is a technical kickboxer with decent power and good wrestling defence in his back pocket, while Allan is a powerhouse who looks to use his physicality and striking to win fights. This is the stylistic fight that Allan would have wanted, but he’s getting it against someone who’s a level or two ahead of him.

With great technique, excellent low kicks plus an advantage in height, reach and speed, Jacoby stands to pick Allan apart throughout the 15 minutes and earn a comfortable decision win in the end.
PICK – Dustin Jacoby via Decision

A retirement bout at heavyweight as Gian Villante makes his final walk to the octagon. Villante has lost each of his last three fights, getting finished in two of them while Barnett lost his short-notice UFC debut against Ben Rothwell in May via submission.

Villante is your bog-standard heavyweight, with looping hooks and power in the one-shot-at-a-time he throws. Barnett on the other hand is far more unorthodox, with plenty of spinning techniques and great power despite his size and physique. Villante doesn’t have the wrestling to test Barnett’s takedown defence and with one foot out of the door, it doesn’t bode well for him.

Barnett has genuine knockout power, good speed, good variety in his strikes and a point to prove. I expect him to show up and show out to secure a big finish in the first half of the fight and let Villante go out on his back.
PICK – Chris Barnett via Knockout, Round 1

One thought on “UFC 268: Usman vs Covington 2 – Early prelims predictions”