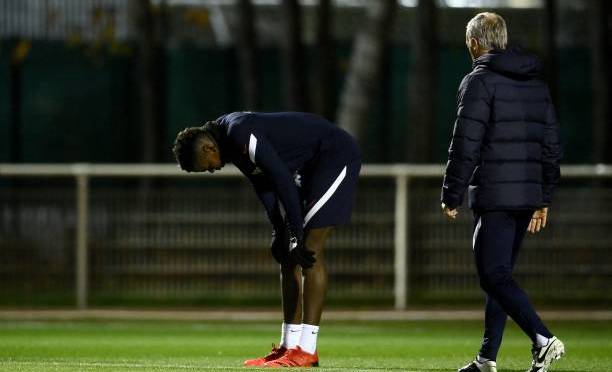 Manchester United midfielder Paul Pogba has been ruled out of action for 8-10 weeks with a thigh injury.

The France international was training with his national team on Monday night, where footage captured him pulling up with an injury during a shooting drill with the team.

He limped out of the session and withdrew from the national team with a thigh problem, and an initial scan has suggested that he will be out until the new year now.

According to French outlet RMC Sport, Pogba’s thigh injury will keep him out until January at the earliest with an 8-10 week period likely until he’s back to full fitness.

Pogba was already suspended for Manchester United’s next league game against Watford on November 20th following his red card in the defeat to Liverpool, but he will now miss games against Villarreal, Chelsea, Arsenal, Crystal Palace, Young Boys, Norwich, Brentford, Brighton, Newcastle, Burnley and potentially Wolves too.

The injury will come as a huge blow to United, who have been in dire form in recent weeks with just four wins in their last 12 games.

Pogba had been one of the club’s better performers at the start of the season but his form has gone cold during that run, much like most of the squad, but his talent is still undeniable.

The 28-year-old’s contract is due to expire at the end of the season and he is free to talk to other clubs from January about a potential transfer in the summer, should he not agree a new deal at Old Trafford before then.

His future looks bleak now with no playing time during that period and United desperate to stem the flow after suffering embarrassing defeats to Liverpool and Man City in consecutive games at home.