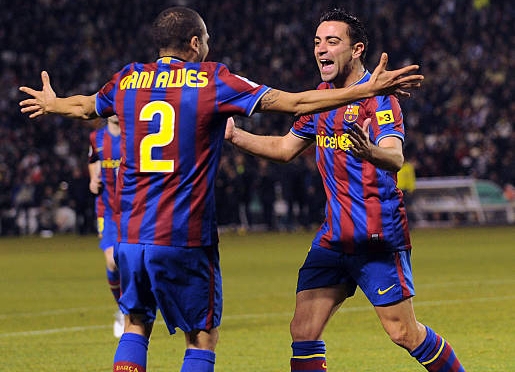 Barcelona have re-signed legendary right-back Dani Alves to their playing squad in a shock transfer.

The Brazilian played for Barcelona 391 times between 2008 and 2016, where he made up part of one of the greatest club teams in history and drummed up a brilliant partnership with Lionel Messi.

He left the club on a free transfer and has since played for a number of clubs, but after leaving Sao Paulo recently following a payment dispute he has now returned to the Camp Nou.

Alves is regarded as one of the best attacking full-backs in the history of the game, with his brilliant dribbling, passing, pace and skill all key aspects of his game.

His technical ability was so great that despite playing the vast majority of his career as a right-back, Alves took the number 10 shirt and played in midfield during his latest stint in Brazil.

A disagreement with Sao Paulo over a non-payment of his wages meant he terminated his contract early, midway through his third season with the club and is now a free agent.

That means he is able to sign for any club outside of the transfer window, although he won’t be able to be registered until January. Reports suggest that he has re-joined Barcelona to help new manager and former teammate Xavi set the new standards in the dressing room.

With Barcelona in financial ruin currently, Italian journalist Fabrizio Romano has claimed that Alves will be the lowest paid first-team player at the club as part of the deal.

In a brief statement announcing the contract agreement until June 2023, Barcelona said;

“FC Barcelona and Dani Alves have reached an agreement in principle for the player to join the football first team for the remainder of the current season. The Brazilian will be joining training from next week but will not be able to play until January.

“The club will announce the full details at his official presentation as a new FC Barcelona player.”

Alves is the most decorated footballer in football history having won an incredible 45 trophies throughout his career with Bahia, Sevilla, Barcelona, Juventus, Paris Saint-Germain, Sao Paulo and Brazil, including an Olympic gold medal and three Champions League titles.

frank lampard rejects chance to take over as norwich manager

One thought on “Dani Alves makes stunning return to Barcelona”