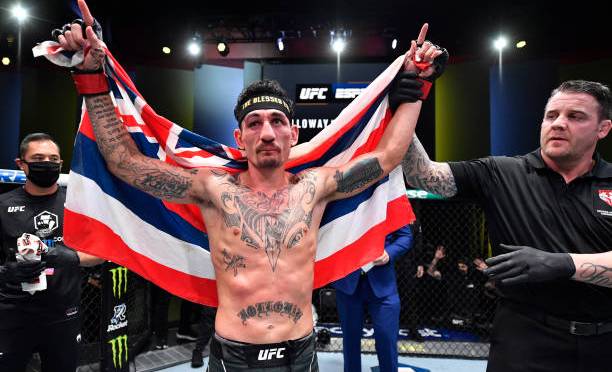 A very good card turned in one of the fights of the year in the main event after nine knockouts from the first ten fights at UFC Vegas 42.

The card itself had plenty of decent names to call from, but none bigger than ‘Blessed’ Max Holloway who was squaring off against the world number three Yair Rodriguez in a featherweight banger to headline.

The main event delivered a back and forth battle between two of the very best strikers in the UFC, with the former champion coming out on top after a war.

Rodriguez won the first round on many people’s scorecards, using leg kicks that worked so well for Alexander Volkanovski in his first fight with Holloway and landing some big punch combinations too.

Holloway struggled to get into boxing range to use his jab because of the kicks, so started going to the body and trying to push through with kicks of his own to close distance.

It worked, but worked better for him was when he started using his wrestling skills.

A career-high three successful takedowns in the fight were a big help towards what ended up being a unanimous decision win for Holloway, earning a 49-46 from one judge and 48-47 from the other two judges.

It showed that despite being arguably the best boxer in the UFC, Holloway is still one of the most well-rounded fighters in the organisation and he isn’t afraid to go to the well when he feels that he needs to.

A third fight with the champion Volkanovski now seems inevitable, with ‘Blessed’ becoming the clear number one contender with yet another win over one of the division’s elite fighters.

But what this fight proved to anyone who ever doubted him is that Holloway can whether a storm. He can adapt when he isn’t necessarily getting the better of the striking exchanges and he will still try and out-work anyone in front of him.

Another title fight in 2022 beckons for the people’s champion, and it seems inevitable that the belt will be back around his waist sooner rather than later.

2 thoughts on “UFC Vegas 42 Fallout: The best is still ‘Blessed’”