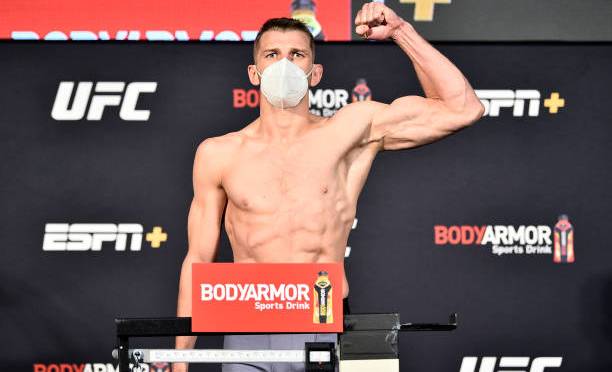 Dan Hooker has revealed that he is planning to move back down to featherweight after a test run to make weight.

Hooker is currently a top-ten ranked lightweight contender but has last three of his last four bouts in the division after initially going on a run at 155lbs.

‘Hangman’ has previously competed at 145lbs but moved up after suffering defeats to Yair Rodriguez and Jason Knight. He eventually went on a run of seven wins in eight bouts at lightweight, before his most recent run of results.

After wins against all of Ross Pearson, Marc Diakiese, Jim Miller and Gilbert Burns he was defeated by Edson Barboza in 2018. He bounced back from that with wins over James Vick, Al Iaquinta and Paul Felder to enter the top five of the division.

However against the top fighters in the division Hooker has struggled, suffering a decision defeat to Dustin Poirier at UFC Vegas 4 before a first-round KO defeat to Michael Chandler at UFC 257.

He returned to winning ways against Nasrat Haqparast via decision at UFC 266, but took a short-notice bout against Islam Makhachev at UFC 267 and was dominated en route to a first-round submission defeat.

Those defeats have seemingly convinced him to take a look back down at 145lbs, as he revealed in a tweet that he had made the 146lbs limit during a test cut.

The move down to 145lbs could set up a number of top fights for the primary striker with the likes of Max Holloway, Yair Rodriguez, Korean Zombie, Brian Ortega and Calvin Kattar making up the top five behind current champion and teammate Alexander Volkanovski.

Hooker would likely enter against one of those top opponents should he make the final decision to move down in weight again, considering his current ranking in the weight class above.

Holloway looks certain to take on Volkanovski in his next bout for their trilogy title fight, while Ortega and Yair Rodriguez could be matched up having both suffered defeat in amazing bouts against the two top guys in their last outings.

Kattar is scheduled to fight Giga Chikhadze in January, so it’s possible that Hooker could re-debut in the division against the Korean Zombie, who was well beaten by Ortega before dominating Dan Ige last time out. Arnold Allen would also offer up a potential opponent.

2022 looks set to be the start of a new chapter for ‘Hangman’, and one that could have title implications for the New Zealander.

why covington and masvidal should be the next tuf coaches

One thought on “Dan Hooker looking to move back to Featherweight”