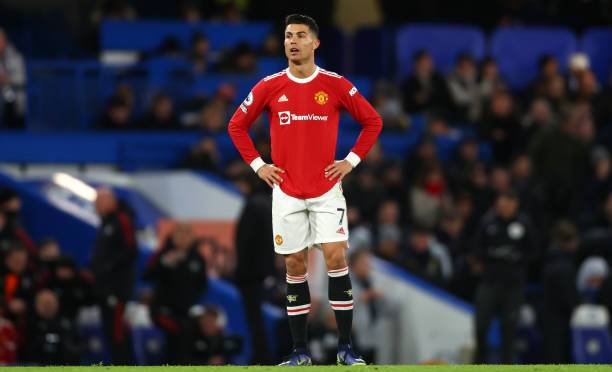 Manchester United secured a huge point away to Chelsea at Stamford Bridge on Sunday, but bigger than the result was Michael Carrick’s decision to drop Cristiano Ronaldo.

United started the game in a 4-3-3 shape with Marcus Rashford and Jadon Sancho flanking Bruno Fernandes as the striker, with all of Fred, Scott McTominay and Nemanja Matic playing in midfield.

The Reds took the lead in the second half as Sancho pounced on a Jorginho error to slot past Edouard Mendy, before the Italian converted a penalty to ensure a nervy finish.

Ronaldo wasn’t on the pitch when United went ahead but had been called upon by Carrick before the penalty decision, while he was largely anonymous on the field for the rest of the game.

Carrick implemented a high press to try and force Chelsea into errors higher up the pitch, but the home side managed to cope fairly well for the most part.

While some speculated that the incoming Ralf Rangnick may have had something to do with the team selection and decision to drop Ronaldo, Carrick completely ruled that out and it was pretty clear from the style that the German had no involvement.

But what it did offer up were some questions about how Ronaldo will fit in going forward.

The Portuguese forward is the club’s top goalscorer this season with ten goals, but the Premier League has proved tough for him with just four goals in nine appearances so far. His lack of defensive nous means United are often a man down when it comes to the transitions and keeping clean sheets.

Despite that though, he has proven to be United’s saviour on several occasions already. He scored twice on his debut in a 4-1 win over Newcastle, scoring the opening and go-ahead goals in the game.

All of his goals to date have been meaningful and contributed towards United winning points. So how is it that someone so important can also potentially be a hinderance to the current United squad going forward?

Ultimately, that is the case. His defensive frailties don’t help the side whatsoever on the pitch, but going forward you can’t just ignore how good he is when it comes to being clinical and winning you games.

With Ronaldo now 36-years-old, you get what you’re given with him at this point. United knew what he offered when they signed him and they did it anyway. To his credit, he has performed too.

For United and Rangnick now, the task remains the same. They need a cohesive defensive unit on the pitch, which also contains Cristiano Ronaldo in attack to have the perfect balance to win games, especially at the highest level.

The Portuguese legend is currently both a poison and a medicine to the Manchester United squad, but United must now find a way to perfectly balance the doses of each.