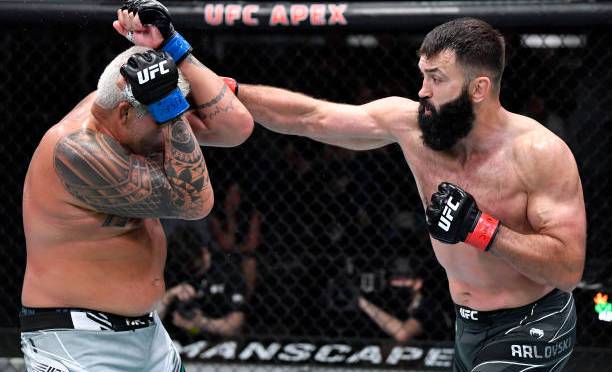 The UFC brings UFC 271 to Houston, Texas for a middleweight showcase at the top of the card.

In the main event we’ll see the undisputed 185-pound title on the line when Israel Adesanya takes on Robert Whittaker in a rematch from 2019, where the best of the generation will be crowned too.

Slightly further down the card will be a middleweight title eliminator too, as Jared Cannonier takes on Derek Brunson to potentially decipher who the next contender will be for the belt.

We’ll look to improve on that this week with this huge 15-fight card and after starting with the early prelims here, we move on to the rest of the prelims now.

A really fun light heavyweight bout between two huge 205-pounders. Ulberg came into the UFC with a big reputation, but was knocked out by Kennedy Nzechukwu at UFC 259 in his debut. Cherant on the other hand was expected to be a problem in this division, but has been finished by Alonzo Menifield at UFC 260 and then got KO’d by William Knight at UFC Vegas 34.

Ulberg is a brilliant kickboxer, with great power and movement to go with blistering speed. Cherant on the other hand is a huge wrestler, who looks to close distance and get hold of you before using his pure power to drag you to the mat. It’s a battle of polar opposites in this one and it’s hard to decipher which way it’s going to go.

Cherant is more than capable of getting a takedown and his submission skills are top tier, but he’s shown a capability to get his lights turned out. Ulberg has got great power and almost KO’d Nzechukwu in his first bout before his cardio gave up on him. If he can land early, he’ll claim the victory. If he gets dragged to the mat, it’ll be a long night for him. Because of the obviousness of their plans, I expect Ulberg to be able to land big before Cherant can close the distance for a takedown, and that will be enough for the win.
PICK – Carlos Ulberg via Knockout, Round 1

A super fun flyweight bout up next. Perez makes his return to the cage after his title fight submission loss to Deiveson Figueiredo at UFC 255, while Schnell looks to return to winning ways after a decision loss to Rogerio Bontorin at UFC 262 earlier this year.

Perez is a very well-rounded fighter with good boxing skills and some excellent grappling skills too, while Schnell is equally well-rounded with some decent submission skills and a good high guard when striking, although he doesn’t have show-stopping one-punch power. His wrestling isn’t the best and I think Perez has the edge there, while on the feet he also has a disadvantage int his match up.

Schnell’s best hope in this one is to either clip Perez on the feet in an exchange, or locking up a submission in a scramble. Perez is likely to be able to out-box him in a striking battle and he has the grappling to survive for the most part so I think he grinds him down on the feet with leg kicks and lands the bigger shots in the fight to earn the judge’s decision.
PICK – Alex Perez via Decision

An absolute banger at bantamweight between two super exciting 135-pounders. Kyler Phillips saw a four-fight win streak snapped by Raulian Paiva last time out at UFC Vegas 32, while Rojo suffered an incredibly exciting defeat to Charles Jourdain in his debut at UFC Vegas 21.

Phillips is a terrific striker, with great movement and power and combinations that usually end with a high kick landing clean. He’s also a good wrestler, with a strong double-leg and a willingness to mix it up. Rojo is a powerful striker with lots of kicking techniques and explosive Muay Thai. While Rojo probably has the power advantage, everything else starts to lean towards Phillips’ side.

He’s quicker, more evasive, has good power of his own and sets a good pace which means he should win this bout. Rojo absolutely has the ability to slow him down with leg kicks and use his size to clinch, but Phillips is good enough to cause a variety of problems and because of his willingness to take punches I think Phillips could get a finish.
PICK – Kyler Phillips via Knockout, Round 2

A passing of the torch moment in the flyweight division for the women here as Modafferi makes her walk to the cage for the final time in her career. A 46th occasion as a pro, Modafferi is on a two-fight losing streak having been beaten by Viviane Araujo at UFC Fight Island 8 and Taila Santos at UFC 266 most recently. O’Neill on the other hand is an impressive 8-0 including three finishes from three fights in the UFC with victories over Shana Dobson (UFC Vegas 19), Lara Procopio (UFC Vegas 29) and Antonina Shevchenko (UFC Vegas 38).

Modafferi is probably the worst fighter in the UFC when it comes to aesthetics, with horrible striking but some classy grappling and jiu-jitsu skills. She knows how to make a fight ugly and find a way to win. O’Neill on the other hand is a freight train at the moment, with excellent grappling with ground-and-pound, submissions and good striking on her feet too.

Realistically the only question in this fight is whether or not O’Neill can finish Modafferi rather than take her the full 15 minutes. She’s better everywhere and not even in her prime yet. I expect that she’ll be relentless in the pursuit of a finish but Modafferi will go out without being finished on this occasion.
PICK – Casey O’Neill via Decision

A heavyweight bout between two relative veterans is the featured prelims fight of the night. Former champion Arlovski is on a two-fight win streak having earned decisions against Chase Sherman at UFC Vegas 24 and Carlos Felipe at UFC Vegas 40. Vanderaa on the other hand was well beaten in his last fight against Alexandr Romanov at UFC Vegas 39 when he got TKO’d in the second round.

Arlovski is an all-round heavyweight, with good wrestling and excellent striking as well as the experience and cardio to go all night. Vanderaa is a volume heavy striker, which is weird to see from a heavyweight, but he also has some solid ground and pound. If he can get Arlovski to the ground then he should be able to hold him there and secure a victory, potentially via finish.

Unfortunately for him though, Arlovski is very tough to take down and almost impossible to knockout even at his age now. He’ll look to close the distance to keep Vanderra from exploiting him but ultimately Arlovski will land the bigger shots in their exchanges to earn a narrow judge’s decision.
PICK – Andrei Arlovski via Decision

One thought on “UFC 271: Adesanya vs Whittaker 2 – Prelims predictions”