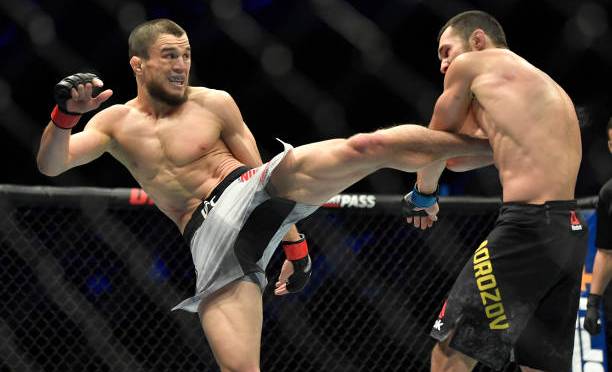 A super highly anticipated grudge match main event at UFC 272 is finally upon us as Colby Covington and Jorge Masvidal will clash in the welterweight division.

‘Chaos’ and ‘Gamebred’ will finally settle their very personal differences in the octagon after their friendship went sour several years ago, but while fans are hoping for a scrap it could actually be a bit of a mistmatch.

We’ll also see a five-round co-main event that was put together on short-notice as Rafael Dos Anjos takes on Renato Moicano at a 160-pound catchweight.

Check out our full record for our predictions to date here.

A big fight to start up the card in the light heavyweight division. Jacoby is undefeated in his last seven fights, with six wins including a decision win last time out at UFC 268. Oleksiejczuk has won each of his last two, earning a split decision over Modestas Bukauskas at UFC 260 before a KO win against Shamil Gamzatov at UFC 267.

Jacoby is an excellent kickboxer with some really good footwork and heavy hands, while Oleksiejczuk is a pressure-heavy fighter with super power in his hands. While Oleksiejczuk likes to walk forward, he struggles often to cut the cage off which will allow Jacoby room to move and even piece up the legs from the outside.

Oleksiejczuk isn’t much of a kicker at all and his volume often leaves you wanting more from him, and that’s why I can’t see past Jacoby winning. He can pick him off from the outside with kicks, while also holding his own in the centre. Both have a good chin, so I expect a Jacoby decision.
PICK – Dustin Jacoby via Decision

A short-notice banger at lightweight up next. Devonte Smith has never been to the judges in his professional career, but he has lost two of his last three with KO defeats to Khama Worthy and Jamie Mullarkey at UFC Vegas 38 coming either side of a KO win against Justin Jaynes at UFC Vegas 18. Klein on the other hand has lost his last two fights in a row, getting submitted by Nate Landwehr last time out. He steps in on one week’s notice.

Both of these guys are excellent strikers, but in different ways. Smith has good pressure and excellent power, while Klein tends to stick on the outside a little more and use his kicks and technique to break opponents down. While Smith isn’t the type of fighter to suffocate an opponent with pressure or grappling, he has got it in him. He’s a decent wrestler and has enough power to try and empty the tank early and finish the fights in the first round.

If he does that against Klein he will earn a victory, but the Slovakian is well aware of his weaknesses and surely will have worked on it. But with just one week of notice against an absolute powerhouse, I think they get into an exchange early on and Smith clips him for a big win.
PICK – Devonte Smith via Knockout, Round 1

The super experienced Tim Elliott welcomes a super hot prospect in this bout in the flyweight division. Elliott has lost four of his last six including his last bout where he dropped a decision to Matheus Nicolau at UFC Vegas 39, while Ulanbekov is on a five-fight win streak including two wins in the UFC against Bruno Silva at UFC Fight Island 5 and Allan Nascimento at UFC 267.

Elliott is a decent striker with some good wrestling in his pocket and good submission skills too, while Ulanbekov is a primary wrestler who has awkward and strange striking attacks on the feet. Because of that wrestling though, he has the ability to dictate where this fight goes and that should give him the edge throughout the bout.

Ulanbekov will have to be wary of the leg kicks of Elliott and any submissions while he’s on top, but his control of opponents in those positions keeps him in a favourable reckoning here. Elliott will need to sweep him or prevent the takedowns entirely, but his past suggests he’ll struggle with that so I expect the Dagestani to claim a decision win relatively routinely.
PICK – Tagir Ulanbekov via Decision

A banger in the featherweight division closes out the early prelims section of the show. Kelleher claimed consecutive wins for the first time since 2020 with his recent victories over Domingo Pilarte and Kevin Croom at UFC Vegas 46 in the opening card of the year. Nurmagomedov on the other hand is undefeated, with a big submission win in his debut at UFC Fight Island 8 against Sergey Morozov.

Kelleher is a talented wrestler who has got excellent cardio and good power in his looping hooks, and he’ll be coming up against the brilliant Dagestani who has got excellent striking skills as well as the customary wrestling that comes with being from where he is from. ‘Boom’ has got a great chance of victory if he lands a big right hand with his pressure or manages to sneak in a guillotine when defending a takedown, but aside from that it looks like a long night.

Nurmagomedov is the better, more technical striker, the better wrestler and the bigger man in the cage. He’s got the edge everywhere so unless he’s sloppy, he should claim an impressive win here.
PICK – Umar Nurmagomedov via Decision

ufc 272: grudge match or mismatch in the main event?