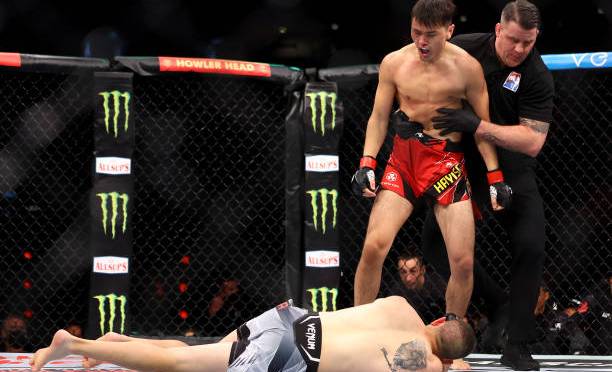 The final UFC card of 2022 is upon us after a crazy year, with middleweight contenders battling it out in the main event.

Jared Cannonier returns to the octagon after a failed title attempt to take on Sean Strickland, whose last fight saw him beaten by the current champion in the division.

We’ll look to improve on that here, starting with the early prelims here.

A fun scrap to open the card in the bantamweight division. Morozov is 2-2 in his last four, losing to Usman Nurmagomedov (UFC Fight Island 8) and Douglas Silva De Andrade (UFC 271) while beating Khalid Taha and Raulian Paiva most recently. Newson on the other hand was KO’d by Randy Costa at UFC Vegas 11, before taking over a year off and returning with a win over Fernando Garcia most recently.

Morozov is a solid all-rounder, with excellent striking technique and solid wrestling to go with his excellent top game with vicious ground and pound skills. Newson is on his way to becoming an all-rounder, but he’s not quite there yet although his Brazilian jiu-jitsu is very useful for him. With that said though, Morozov just seems to be better everywhere this fight goes.

He’s the better, more powerful and more aggressive striker, and his top game is far better than Newson’s bottom game is when it comes to ground-and-pound vs jiu-jitsu. I don’t see a finish because Newson is no pushover, but Morozov has the skills to win the close exchanges and take over more as the fight goes on to claim a decision on the cards.
PICK – Sergey Morozov via Decision

Banger at flyweight next. Dvorak saw his 16-fight win streak snapped last time out when Matheus Nicolau earned a decision over him in his last bout. Kape alternatively has won his last two in a row, KO’ing both Ode Osbourne (UFC 265) and Zhalgas Zhumagulov (UFC Vegas 44).

Dvorak is a brilliant boxer with good footwork and a lovely jab, while his defensive grappling is also excellent to keep fights standing. His biggest weakness is that he can be a slow starter. Kape on the other hand is an explosive striker with great counter-striking and good defensive wrestling too. His biggest weakness is that he tends to wait a lot to counter attack, and that lack of volume cost him in his opening two UFC fights.

That slow start for Dvorak could be a huge issue, because Kape likes to come out of the blocks quickly with his big strikes looking for a finish and he has excellent knockout power. Dvorak can get hit and hurt, but if he gets past that stage then it will be an excellent striking match. I’ll lean with Kape because it’s highly unlikely he loses the first round if he fights properly, and that’s an obvious advantage.
PICK – Manel Kape via Decision

A very interesting welterweight bout up next. Battle is on a seven-fight win streak including winning the latest series of TUF, beating Gilbert Urbina in the finale, then beating Tresean Gore and KO’ing Takashi Sato most recently via head-kick. Fakhretdinov steps in on just two-weeks’ notice on an 18-fight win streak, who won his UFC debut last time out back in June.

Battle is a really good fighter with a bit of everything in his wheelhouse, with some solid wrestling and great submission skills as well as explosive striking when he needs it and unlimited cardio. “Gladiator” is likely to try and wrestle his way to victory here, but he has got crazy power too and often relies heavily on landing one big shot.

But with Battle’s style of moving constantly and being strong everywhere, it’s hard to see how he loses this one. There is always the chance that Fakhretdinov wrestles his way to a win, but he really lacks urgency to be busy and against Battle that is a recipe for disaster.
PICK – Bryan Battle via Decision

Lightweight banger up next between two prospects in the weight class. Garcia saw his two-fight win streak snapped last time out when he lost to Drakkar Klose at UFC 277, while Maheshate is on a seven-fight win streak with a first-round KO in his UFC debut against Steve Garcia most recently at UFC 275.

Garcia is a very good wrestler, who has got five round experience and fantastic cardio to be able to wrestle all night long. Maheshate is a striker, with a piston-like right hand that has the power and ability to put people out if he lands clean. Garcia is a very aggressive fighter which can leave opportunities for Maheshate to land counters, but this is a big step up in competition.

“Gifted” is likely to make this an ugly fight, because if it’s clean and technical then he is in Maheshate’s world. Garcia is likely to push him against the cage, constantly work for takedowns and use lots of dirty boxing and clinches. He’ durable and has great cardio to be relentless for 15 minutes, and I expect Garcia to put an end to the hype relatively comfortably in a fun fight.
PICK – Rafa Garcia via Decision