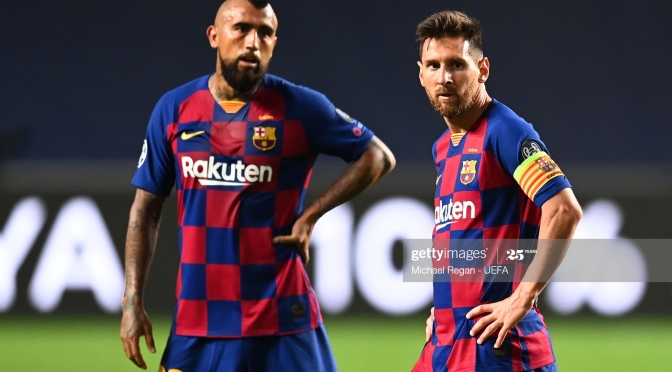 Barcelona and Arturo Vidal have come to an agreement on the termination of his contract at the club, paving the way for a move to Inter Milan.

The Chile international joined Barcelona from Bayern Munich in 2018 for a fee of around €20million as manager Ernesto Valverde looked to shore up the midfield. He came into the side seemingly at the expense of Ivan Rakitic as Barcelona won La Liga in his debut season.

This season though, Barcelona struggled heavily and ended up with their first trophy-less season since 2007/08. That was culminated by a humiliating 8-2 defeat to Bayern Munich in the Champions League quarter-final, which led the club to commit to a complete restructuring of the club from playing staff to board level.

That meant that new manager Ronald Koeman had decisions to make and he opted to tell older statesmen Luis Suarez, Ivan Rakitic and Vidal that they were not going to be part of his plans going forward. All the players have negotiated moves away, with Rakitic already joining Sevilla and Suarez reportedly agreeing personal terms with Juventus.

With Vidal and the club locked in negotiations over the severance of his contract, Vidal has reportedly agreed to waive the remaining wages of his deal in order to be released for a free transfer so that he can join Inter Milan.

Inter are currently managed by Antonio Conte, who managed Vidal during their time together at Juventus. Vidal played the best football of his career with Juve under Conte and the pair are reportedly desperate to reunite with each other for the final dance under the lights of Vidal’s career.

An aggressive box-to-box midfielder with an eye for goal, Vidal would settle into Conte’s high-intensity style with ease in the centre of his 3-5-2 formation. After making it to the Europa League final, Inter’s board held a meeting with Conte and decided they would back him in the transfer market where they could and he made it clear that Vidal was a priority.

With Lautaro Martinez likely to stay at the club now into next season and with Christian Eriksen hoping to slot into the side better than he did following his January move.

As Inter look to close the gap on Juventus and deny them a decade of consecutive league title wins, it’s two of new manager Andrea Pirlo’s former colleagues who are looking to partner up and beat him in the race.

ndombele no closer to spurs exit despite desire to leave