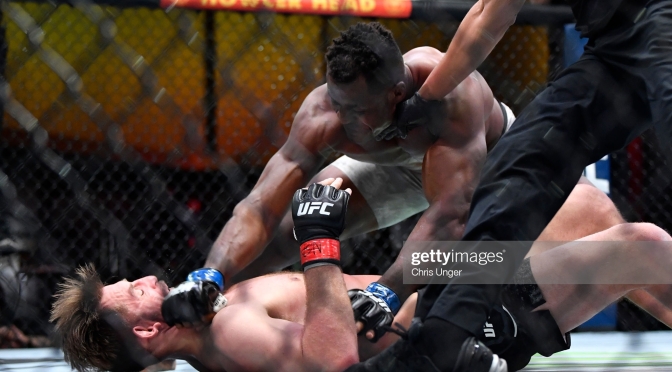 There is a brand new baddest man on the planet and his name is Francis Ngannou.

The Cameroon-born Parisian fighter showed just how far he has come in the last three years as he managed to keep the consensus greatest heavyweight of all-time to just 12 significant strikes en route to a second round knockout victory.

It was a sign of just how much improvement the 34 year old has made since the first meeting between the two, as he was patient and dangerous while showing improved grappling skills.

Ngannou landed some heavy shots early on and when Miocic did shoot for a takedown, ‘The Predator’ was not only able to lift him back up and sprawl down to stuff it but he floated and was able to take the former champion’s back and land some heavy ground and pound of his own.

As soon as that moment happened, Miocic looked like a deer in the headlights and just wasn’t able to get going. Ngannou was so much bigger, so much stronger, so much more powerful and just seemed more game throughout.

Miocic deserves some credit though, as he ate some of Ngannou’s biggest shots including a flush head kick and was durable early until Ngannou went for the kill. A short left hook from Ngannou was the final nail in the coffin of Miocic’s title reign, with the punch while he was unconscious was the exclamation point on what is now the era of the African champion in the UFC.

Speaking in the post-fight press conference, he gave some inspirational words about his rise from the streets of Paris and spoke positively of the defeat he suffered three years ago in his first title fight – essentially calling it the biggest lesson of his career so far.

“I’ve never been shy about it. I think it was just so tough for me, I didn’t like to think about it. At some point I felt like it was a moment I want to erase from my life but you know, moving on, I understood that this also made me who I am today.

“A lot of people also go through that, the same struggle as me, you know, didn’t have a chance. Every kid should at least have a chance to enjoy his childhood then become an adult who is in charge of his life so he can take action and be responsible for his life.

Elsewhere on the card, Tyron Woodley fell to a fourth consecutive defeat in the welterweight division since losing his title back in 2019 when he was submitted by Vicente Luque in the first round.

Woodley was true to his word and came out very aggressively, attempting to use his wrestling skills before landing heavy strikes with his hands to rock the Brazilian. But as he loaded up a big, looping right hand to try and finish the fight, Luque was able to return with a right hook of his own that essentially put Woodley out on his feet.

He was able to keep landing big punches before eventually locking up a d’arce choke to force the tap out win. After the fight Luque moved to call Nate Diaz for a big clash at 170lbs while UFC president Dana White hinted that it could be time for the former champion to retire. Woodley said after the fight on Instagram that “it was going well until it wasn’t,” but he doesn’t regret his approach.

“Sh*t was going really well until it wasn’t. My camp pushed me in ways I haven’t been pushed in a while. I committed, and swore to myself I would bring the tiger out that earned me gold. I saw the opportunity for the KO and got too excited. Paid a big cost.

“I don’t regret my aggression as that’s what God created me to do. [Luque] is a tough and humble fighter. Was an honor to share the cage with you tonight.”