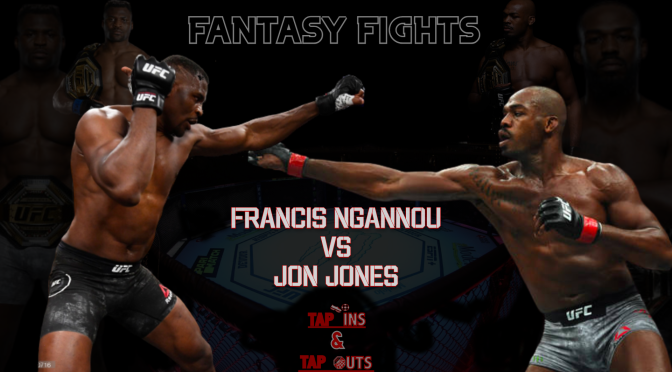 It’s a fight that is bound to happen eventually with the way the world is right now, but that doesn’t make it any less of a fantasy fight as it stands.

The biggest and baddest of the big, bad men in the UFC Francis Ngannou is the man right now. The reigning, undisputed world heavyweight champion overcame one of just two losses in his professional career when he knocked out Stipe Miocic at UFC 260 earlier this year.

Immediately the conversation switched to his first defence, which many assumed would be against the consensus greatest of all time, former light heavyweight champion Jon Jones.

‘Bones’ vacated the 205lbs title last year after successfully defending the title for an 11th time against Dominick Reyes in order to pursue a move up to heavyweight. He called out Miocic for a fight, but claimed he wanted to take his time to put the weight on ‘the right way’ by bulking up in the gym.

Since then he has gained plenty of muscle mass, weighing in now at around 240lbs while looking far more powerful than we’ve ever seen him before.

Financial differences mean the fight hasn’t happened yet and won’t be booked any time soon, with Ngannou likely to defend the title against Derrick Lewis later this summer. But that just makes us wonder even more what would happen if ‘The Predator’ stepped into the octagon with the greatest of all time for the heavyweight strap.

Well the first thing we know is that if Ngannou lands a clean strike, the fight is essentially over. Jones has never been beaten in his career, apart from his disqualification to Matt Hammil, but he’s also never been dropped either.

He has a phenomenal chin, but he’s never fought at heavyweight before and Ngannou could well be the hardest hitting man to ever live.

One thing Jones does have to his advantage is his 84.5 inch reach, and he knows exactly how to use it. There would be a 1.5 inch difference between the two fighters, and Jones is well known for using his kicks too to extend that reach. He uses push kicks to the body and he will be the heaviest leg kicker that Ngannou has ever come up against.

When it comes to wrestling, you’d expect Jones to have the advantage too. He’s always been able to outwrestle his opponents, but even against Reyes it took him a while to really get the takedowns going. Ngannou showed hugely improved wrestling against Miocic in their rematch and with his natural size and power advantage over Jones, it’s hard to see how he would be able to fair any better than Stipe did.

If Jones did get the fight down to the ground, he’s much more of a submission threat than Miocic was. He has six tap out wins throughout his career and has even competed in submission tournaments to test himself out, so he is more than competent and would expect to be strong enough to hold Ngannou down if needed.

Ngannou is really good at closing the distance quickly to lands his vicious strikes and Jones’ footwork isn’t as good as it once was. Considering how much bigger he’ll be, it’s likely that he will have slowed down a bit too and evading Ngannou isn’t the easiest thing to do. Jones can’t just rely on his chin because he’ll get put to sleep, so he’ll have to be really smart.

He’ll have to keep that distance using his kicks, keep his head off the centre line and keep moving, using his takedowns whenever necessary and using all his experience.

It’ll be near impossible for Jones to get a stoppage on the feet, because he isn’t and has never been one of the more powerful guys at light heavyweight never mind if he moves up. Despite that though, I just can’t back against him.

He’s the best ever and while he’s had a couple of close shaves, he has that aura of invincibility around him still in my eyes.

Ngannou is the scariest heavyweight ever but he’s still quite early on in his career in terms of experience and I think Jones has the qualities to overcome him in a five-round war, gradually taking over as it goes on.

One thought on “Fantasy Fights: Francis Ngannou vs Jon Jones”