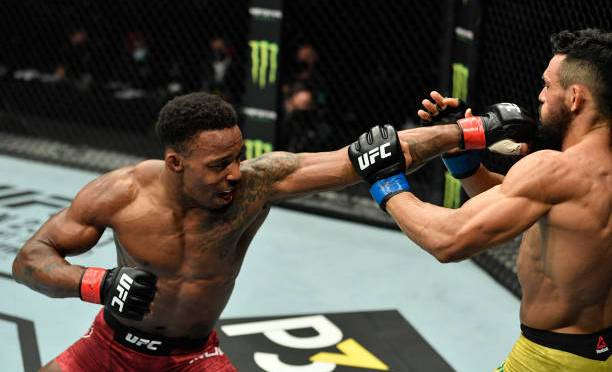 An absolutely stacked card comes to you live from Fight Island in Abu Dhabi this weekend at UFC 267.

Headlining the card is a chance for Jan Blachowicz to legitimise his light heavyweight title reign when he defends the belt against Glover Teixeira in the main event.

There is also an interim bantamweight title fight between Petr Yan and Cory Sandhagen in the co-main event slot, with many fans considering it the ‘real’ title fight.

Also on the card is Islam Makhachev looking to prove Khabib Nurmagomedov right when he fights Dan Hooker, while Khamzat Chimaev makes his return to the octagon for the first time since September 2020.

We’ll look to improve on that with this huge 15-fight card, starting with the early prelims.

A very fun flyweight bout opens up the card on Fight Island. Ulanbekov has won his last four-in-a-row, including his UFC debut against Bruno Silva at UFC Fight Island 5 last year. Nascimento was beaten on Dana White’s Contender Series but then returned to Brazil with a victory to earn this UFC debut.

Ulanbekov is a brilliant wrestler, who uses his top game and ground and pound strikes to control his opponent and win fights. Nascimento is more of an all-rounder, with explosive striking and good scrambles on the mat to go with 13 submission wins in his career. This fight is always certain to go to the ground, but it’s all about who ends up on top.

The likelihood in my opinion is that guy will be Ulanbekov. Nascimento has struggled with worse wrestlers in the past and while the Russian will have to be careful of potential submission attempts, I expect him to rack up plenty of top control to earn a decision win.
PICK – Tagir Ulanbekov via Decision

An absolute banger at lightweight in a potential fight of the night contender next. Mustafaev has lost two of his last three in the UFC, with defeat to Brad Riddell most recently in February 2020 while Ismagulov has won 18-in-a-row including all four of his UFC bouts, with victory over Rafael Alves at UFC Vegas 27 most recently.

This is a super exciting fight. Mustafaev is a vicious kickboxer with super heavy kicks and brilliant punching power too. Something he doesn’t have though is brilliant wrestling, something Ismagulov has and is able to mix in with his own excellent striking. Mustafaev’s kicks could become nullified if Ismagulov looks to catch them, with the Kazakhstan fighter using his jab and low kicks of his own to earn victories.

Both men have the ability to end the fight in range, but neither have ever been knocked out before in their career. That leads me to think control could be key and with Ismagulov having the wrestling edge, he’ll claim the victory.
PICK – Damir Ismagulov via Decision

A weird fight in the middleweight division between two relative novices in the UFC. Yaozong has lost both of his UFC appearances and hasn’t fought since way back in 2018, while Petroski was part of the contenders in the most recent Ultimate Fighter series who earned his first win against Michael Gillmore at UFC Vegas 35.

Yaozong is a decent kickboxer on the feet, but he really struggled in all his UFC bouts prior to get that going. Petroski on the other hand has shown great wrestling skills with a good mix of ground and pound and submissions on the mat too, but when the takedown isn’t available he tends to look a little lost. Lucky for him, the version of Yaozong we all know can’t defend takedowns for love nor money.

Three years away is a long time, plus the fact he is fighting in a new weight class and he’s never really looked impressive means I have to go with Petroski to blast a takedown early and eventually secure a finish from the top.
PICK – Andre Petroski via Submission, Round 1

One of my personal favourite fights on the card is a banger between two European featherweights. ‘Mr Finland’ Amirkhani has lost each of his last two, dropping decisions to Edson Barboza and Kamuela Kirk most recently at UFC Vegas 28. Murphy on the other hand has earned successive wins in the UFC against Ricardo Ramos at UFC Fight Island 2 before a decision win over Douglas Silva de Andrade at UFC Fight Island 8.

Amirkhani is a very technical and fun kickboxer, with good volume, great cardio and unbelievable wrestling. Murphy on the other hand is a very well rounded fighter too, with great one-punch power and excellent wrestling of his own too to control opponents. Amirkhani has been able to take down everyone he’s ever fought in the UFC and while I don’t expect this to be different, Murphy is good enough to get back up and be more physical.

Murphy has shown an ability to rally if a fight isn’t going his way, while Amirkhani has shown that he finds it hard to turn things around. With Murphy’s power and wrestling ability too, I expect he’ll be able to control the fight the longer it goes and earn a win in an entertaining fight.
PICK – Lerone Murphy via Decision