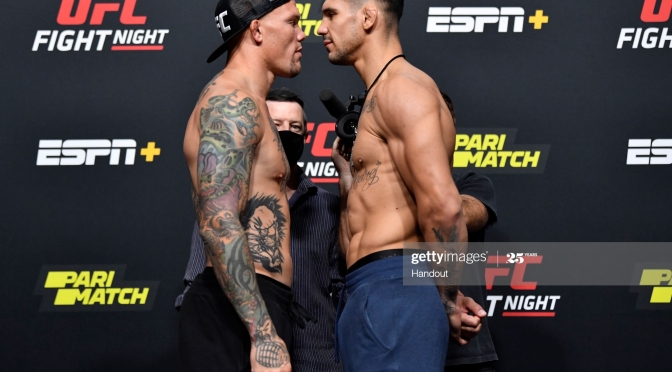 A slow start to the fight with lots of feints and jabs exploded into life halfway through as Hannah Cifers landed a big one-two down the pipe and knocked Martin down! She rushes in and lands huge ground and pound but Martin refuses to quit. More punches against the cage and the referee is super close to ending it, but Martin shoots for the takedown. Cifers stuffs it and lands more big shots but Martin pulls guard to survive the rest of the round. 10-8 Cifers.

Second round, Martin has recovered and immediately shoots for the takedown and gets it. She lands big ground and pound of her own on Cifers who can’t get out from under her smothering top pressure. She lands big elbows that cut Cifers and force her to turn on to her stomach. Martin immediately sinks in a rear naked choke and gets the tap. Huge comeback win!

A quick start sees both women land big strikes with the hands, with Whitmire marking Viana’s face up. She goes for a clinch and looks for the takedown and after a scramble ends up on top, but Viana is throwing big elbows from the bottom and moving well to not let Whitmire settle. Viana continues with the elbows and then throws up an armbar out of nowhere, she rolls through and forces Whitmire to verbally tap almost instantly. Beautifully done and another first-round finish for the Brazilian.

Good opening round for both fighters here as both Brady and Aguilera choose to stand for the majority of the round and exchange punches. Brady is landing a nice left hook quite often, which opens up a small cut over the eye of Aguilera but he continues to push forward and pressure. Aguilera lands a nice right hand and that’s the cue for Brady to rush in for a power double leg. He lands a bit of ground and pound in the final 60 seconds before the round ends. 10-9 Brady.

Second round starts with Aguilera looking to land a calf kick and punches but Brady is wise to it and lands a big power double leg takedown again. He’s looking to pass the guard and ties up the neck of Aguilera in doing so. He passes the knee over into mount and after a short scramble sinks in the mounted guillotine and puts Aguilera to sleep. Still undefeated, that was an excellent performance.

A very strange fight this one. Both men come forward throwing punches and leg kicks but making their opponent miss a fair amount. Springer throws lots of inside leg kicks but Caceres doesn’t mind too much. Caceres moves forward and lands a big body shot, which makes Springer shoot for the takedown. Caceres stuffs the takedown, moves immediately to the back and throws in a rear naked choke with a body lock too that puts him to sleep. 3 in a row for Bruce Leeroy.

A tame first round between these two who are both throwing wild in the pocket exchanges but nothing much either side of that. Di Chirico lands a big left and right hook but Cummings eats it and continues to walk forward. As the round starts to wind down, the Italian lands a few more big shots that may have wobbled Cummings but overall a more strategic round than anything else. 10-9 Di Chirico.

Another very tactical round between the two fighters but Cummings seems to have been able to make the reads he needs. Di Chirico throwing a lot of the same shots as the first round but this time Cummings isn’t there to be hit, while he’s landing his left hand more often although not crazy powerfully. Nice inside leg kick towards the end of the round from Cummings drops Di Chirico but other than that a very close round. 19-19 for me.

Third round and Di Chirico comes out SWINGING. He’s throwing wide, looping hooks and he connects a few times but Cummings is countering with a straight left that lands flush on the nose. Cummings doing well to manage the distance between the two but lots of respect between both fighters with shadow-boxing and feints. A low blow from Cummings causes a short pause in the fight but as soon as they get back in there Cummings ducks a hook then lands a big left hook of his own. As the buzzer goes Cummings lands a huge head kick to Di Chirico and stumbles back to his corner, just about under his own power. That head kick wins him the fight for me on the scorecards. 29-28 Cummings.

Really fun first round between these two Contender Series fighters. Pitolo landing nice combos and snappy hooks while Kasanganay is looking for looping overhands that are connecting and causing damage. Pitolo stuffs a clinch attempt well and throws a head kick on the break but misses, before a huge overhand lands flush for Kasanganayand cuts Pitolo over the eye. A razor close first round, but for sheer volume I’d go 10-9 Pitolo.

Second round is a bit slower this time around but it’s more of the same in terms of action. Pitolo landing jabs well and snapping out counter strikes but Kasanganay’s big overhand is landing regularly again. Kasanganay starts upping the volume as the round begins to come to an end and lands a huge elbow off the clinch before a big one-two straight to the chin. Pitolo looks tired and Kasanganay is fresh. 19-19.

Pitolo’s cardio looks drained in this final round as Kasanganay continues to march forward and throw big hooks. Another big overhand right cracks the chin of Pitolo, but Pitolo is struggling to land anything significant in return in this round. Kasanganay seems stronger, fresher and quicker in this round but Pitolo showing an impressive chin just eating the shots. Round comes to an end with both men at a stalemate as Kasanganay will take the decision.

A fast paced start to this first round as both guys throw big attacks early. Lamas is throwing a lovely front kick to the body and now mixing in head kicks while Algeo is keeping his hands low but throwing punches in bunches and stepping forward. Lots of wild exchanges but Lamas is now throwing a calf kick that is having great success and affecting the mobility of Algeo. A nice elbow at the end of the round for Algeo hurts Lamas but the experienced fighter clinches and holds out for the end of the round. 10-9 Lamas but a very close round.

Second round starts with a fast pace yet again but Lamas looks to slow it down with a takedown. He takes the back quickly but Algeo breaks the grip and scrambles out back to his feet quickly. More wild exchanges from both as Algeo cuts Lamas open with what could be a broken nose. Lamas now desperate for the takedown but Algeo continues to block them and land big strikes. Lamas goes for another takedown but Algeo throws a huge knee up the middle and rocks Lamas, who moves away and looks to avoid. Algeo goes for the takedown but after a scramble the fight goes back to the feet where Lamas has now recovered. Another fantastic round but that’s Algeo’s for me. 19-19.

Algeo starts on the front foot in this third round but Lamas gets an early takedown to take control in this round. He starts landing big ground and pound in an unorthodox crucifix position which cuts up Algeo and forces him into defence mode. Lamas lands big elbows and continues to hold him down in as many ways as possible, with hooks and taking the back into full mount too. Big elbows and huge punches can’t put Algeo away but they secure a 10-8 round for Lamas which should be a 29-27 win.

A slow start to the round as both women look to feel each other out in the early exchanges. Grasso throws out stiff jabs and one-twos while Kim keeps constantly moving and then countering during any exchanges. Kim lands a huge left hook followed by a right overhand that both land but Grasso eats it well and continues to come forward. Another nice shot from Kim followed by a body kick as the round comes to an end. 10-9 Kim.

A much better round for Grasso in the next two rounds as she uses her heavier hands to inflict more damage and outmuscle her opponent. A dominant, professional win.

An interesting opening round between these two welterweights. Lawler comes forward with a nice body shot and then goes for a takedown but Magny stuffs it and reverses the position really well. A nice grappling exchange between the two ends with Magny on top with a neck crank, but Lawler defends it well. A small amount of ground and pound sees him inflict some damage but overall it’s a wrestling match win for Magny. 10-9.

Second round and Lawler comes out aggressive once again and lands a few strikes before Magny goes back to the wrestling that gave him so much success in the first round. He’s being very heavy on top and causing Lawler lots of problems. During transitions on the ground Magny attempts a Twister submission but can’t quite get the position and Lawler lands nice elbows to get out but Magny too strong and dominant in the wrestling department yet again. 20-18.

Lawler comes out all guns blazing in this final round, knowing he needs the finish for a win. He lands a nice right hand that hurts Magny, but the lanky fighter pulls guard and controls the fight from therein. He is just physically too strong for Lawler and able to dominate everywhere. On the feet again and Magny is landing his jabs and front kick to the body at will. Complete dominance and a masterful performance from the Haitian sensation.

A war between two light heavyweights with title aspirations starts out with big leg kick exchanges between them. Rakic is firing them off and Smith is noticeably in pain, before two quickfire kicks land on Smith and he goes down! Rakic gets on top looking for ground and pound but Smith uses his grappling experience to survive well and take minimal damage while on the bottom. 10-9 Rakic but an odd round compared to what we expected.

Second round and Rakic comes out with an immediate leg kick again but Smith walks through it to close the distance. Smith throws a big right cross that catches Rakic flush and hurts him but then shoots in for a takedown, which Rakic uses his physical strength to deny it and ends up on top himself. Much like the first round now, Smith taking minimal damage but is on the bottom and struggling for anything significant. Rakic staying heavy on top as Smith tries to get back to his feet and ends the round dominant against the cage. 20-18 Rakic.

Rakic opens the final round with yet another leg kick and Smith is in agony. He closes the distance and looks for the back of Rakic, but they’re too sweaty and he slips off, ending up on the bottom once again. Half the round to go and Smith gets to his knees but Rakic so heavy on top and landing big knees to the leg and body. Into the final minute and the fight is the same as it’s been throughout with Rakic dominant on the ground. Hugely impressive performance in a fight that didn’t go anything like what was expected. 30-27 Rakic.